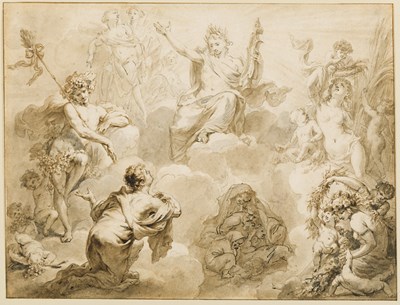 Phaeton Before His Father Apollo


A gifted draughtsman, Godfried Maes produced numerous drawings, both as preparatory studies for paintings and as finished, independent works. Arguably the most significant example of the latter group are a series of eighty-three elaborate pen and wash drawings illustrating various episodes from Ovid’s Metamorphoses, of which the present sheet and the next three drawings form a part. Perhaps intended as book illustrations or designs for prints, these highly refined drawings were, however, never reproduced or published in his lifetime. In 1717 the artist’s widow sold all the drawings to the artist Jacob de Wit, who later used some of them as models for his own designs for illustrations, engraved under the supervision of Bernard Picart, for a 1732 translation of The Metamorphoses into Dutch, French and English editions. (One of the Maes drawings that de Wit copied and adapted for the 1732 Metamorphoses was The Sisters of Phaeton Transformed into Poplars, which appears in reverse in the engraved illustration in the published book.)

The original drawings by Godfried Maes remained together until 1762, when they were dispersed at auction in Amsterdam. These and other drawings by Maes are today in the collections of the Rijksmuseum in Amsterdam, the Wallraf-Richartz-Museum in Cologne, the Hessisches Landesmuseum in Darmstadt, the Hamburger Kunsthalle in Hamburg, the British Museum in London, the Yale University Art Gallery in New Haven, the University Library in Leiden, the Metropolitan Museum of Art in New York, the Louvre and the Fondation Custodia in Paris, the Museum Boijmans-van Beuningen in Rotterdam, the Eesti Kunstimuuseum in Tallinn, the Albertina in Vienna, and elsewhere.

The story of Phaeton is taken from Greek mythology, and was popularized in the second book of the Roman poet Ovid’s epic narrative poem The Metamorphoses. Phaeton was the son of the Sun-god Apollo (also Phoebus or Helios in Greek mythology) and the Oceanid nymph Clymene. Told by his mother that he was the son of a god, Phaeton ascended to the palace of the Sun to ask Apollo if he was indeed his father. The sun-god swore to grant him any wish to prove his divine birthright, and Phaeton requested the right to drive the chariot of the sun for a day. Apollo tried to dissuade him, explaining that not even Jupiter, the king and most powerful of the gods, would dare to drive the chariot and control the fire-breathing horses who pulled it. But Phaeton was adamant, and Apollo was forced to accede to his wishes.

In this, the first of this series of four drawings by Maes, Phaeton kneels before Apollo and makes his request. As Ovid describes the scene:
‘As soon as Clymene’s son had climbed the steep path there, and entered the house of this parent of whose relationship to him he was uncertain, he immediately made his way into his father’s presence, but stopped some way off, unable to bear his light too close. Wearing a purple robe, Phoebus sat on a throne shining with bright emeralds. To right and left stood the Day, Month, and Year, the Century and the equally spaced Hours. Young Spring stood there circled with a crown of flowers, naked Summer wore a garland of ears of corn, Autumn was stained by the trodden grapes, and icy Winter had white, bristling hair.’

‘The Sun, seated in the middle of them, looked at the boy, who was fearful of the strangeness of it all, with eyes that see everything, and said ‘What reason brings you here? What do you look for on these heights, Phaethon, son that no father need deny?’ Phaethon replied ‘Universal light of the great world, Phoebus, father, if you let me use that name, if Clymene is not hiding some fault behind false pretence, give me proof father, so they will believe I am your true offspring, and take away this uncertainty from my mind!’ He spoke, and his father removed the crown of glittering rays from his head and ordered him to come nearer. Embracing him, he said ‘It is not to be denied you are worthy to be mine, and Clymene has told you the truth of your birth. So that you can banish doubt, ask for any favour, so that I can grant it to you. May the Stygian lake, that my eyes have never seen, by which the gods swear, witness my promise.’ Hardly had he settled back properly in his seat when the boy asked for his father’s chariot and the right to control his wing-footed horses for a day.

‘His father regretted his oath. Three times, and then a fourth, shaking his bright head, he said ‘Your words show mine were rash; if only it were right to retract my promise! I confess my boy I would only refuse you this one thing. It is right to dissuade you. What you want is unsafe. Phaethon you ask too great a favour, and one that is unfitting for your strength and boyish years. Your fate is mortal: it is not mortal what you ask. Unknowingly you aspire to more than the gods can share. Though each deity can please themselves, within what is allowed, no one except myself has the power to occupy the chariot of fire. Even the lord of mighty Olympus, who hurls terrifying lightning-bolts from his right hand, cannot drive this team, and who is greater than Jupiter?... You will not easily rule those proud horses, breathing out through mouth and nostrils the fires burning in their chests. They scarcely tolerate my control when their fierce spirits are hot, and their necks resist the reins. Beware my boy, that I am not the source of a gift fatal to you, while something can still be done to set right your request!’… Finally, look around you, at the riches the world holds, and ask for anything from all of the good things in earth, sea, and sky. I can refuse you nothing. Only this one thing I take exception to, which would truly be a punishment and not an honour. Phaethon, you ask for punishment as your reward!...Have no doubt! Whatever you ask will be given, I have sworn it by the Stygian streams, but make a wiser choice!’ The warning ended, but Phaethon still rejected his words, and pressed his purpose, blazing with desire to drive the chariot.’

Phaeton Before His Father Apollo