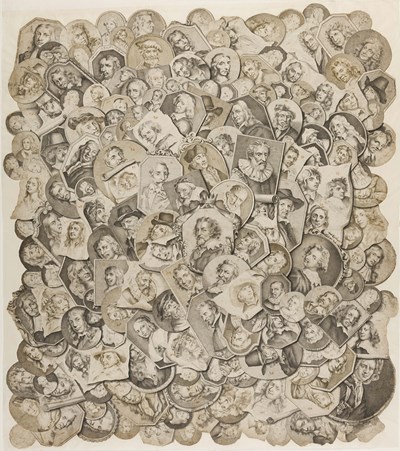 Pen and brown ink and grey wash, on two joined sheets of paper.
The outlines of the composition silhouetted and the whole laid down onto a backing sheet.
Each portrait numbered in brown ink.
Said to be indistinctly inscribed verzameling van …g…af / … Be. mdd… (sc?)hulde on the verso, now laid down.
632 x 565 mm. (24 7/8 x 22 1/4 in.) at greatest dimensions.


This large trompe-l’oeil drawing depicts more than 170 portraits of Dutch and Flemish painters active between the 15th and the 18th centuries. While the small engraved portraits, each numbered in brown ink, appear to have been distributed at random, pride of place is given to a portrait of Peter Paul Rubens, numbered 1 and placed at the centre of the sheet, within a crowned cartouche. The image is taken from the engraved portrait of Rubens in Arnold Houbraken’s biographical compendium De Groote Schouburgh der Nederlantsche Konstschilders en Schilderessen (The Great Theatre of Dutch Painters), published in three volumes between 1718 and 1721. The portrait of Rubens in Houbraken’s book is accompanied on the same page by portraits of the artists Hendrik van Balen and Roelandt Savery, which also appear in the present sheet, as Nos. 9 and 10 respectively.

Trompe-l’oeil still life drawings of this type were popular in Holland in the 18th century, but were often unsigned and as such can be difficult to attribute to a particular artist. Indeed, some of the draughtsmen responsible for such imaginative compositions may have been amateur artists. For example, a similar large-scale trompe-l’oeil drawing of a mass of printed pages, signed and dated ‘N. de Wit 1740’, is in the Nationalmuseum in Stockholm. The artist of the Stockholm drawing has been tentatively identified as one Nicolaas de Wit, born in Amsterdam in 1710, who is not documented as a professional artist.