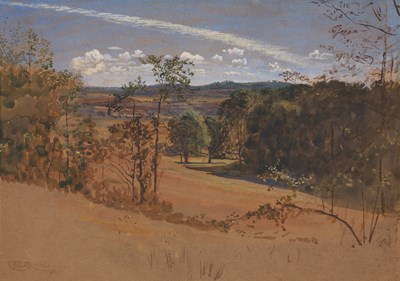 
Dated 1882, this watercolour is a fine example of Walter Crane’s interest in a naturalistic depiction of landscape. While he produced landscape sketches throughout his career, Crane only began exhibiting them in the 1880s, first at the Grosvenor Gallery and later at the Royal Watercolour Society, to which he was elected in 1888. As Greg Smith has noted of the role of landscape in Crane’s oeuvre, ‘The first signs of a tension between the naturalistic and the symbolic occurred towards the end of the 1860s and appear as a clear dichotomy in those works executed in Italy 1871-3. Landscapes capturing the beauty of Rome in spring and the Italian countryside…exist next to more public works in which the same themes are explored in symbolic terms. This set the pattern for the rest of Crane’s career as a landscape artist, a naturalistic approach for the private medium of watercolour and a symbolic mode for a public statement in oil or tempera.’