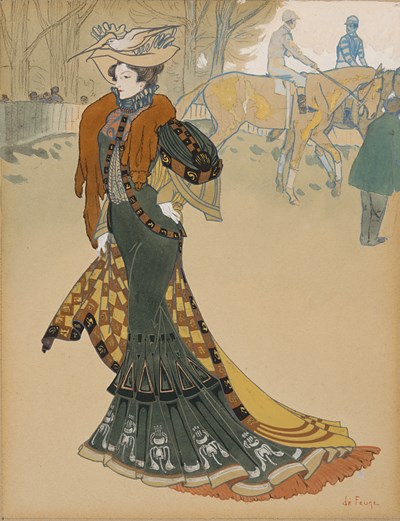 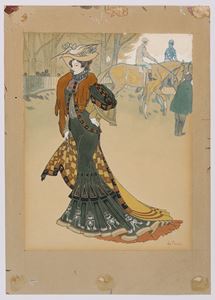 Aux Courses: Design for the Cover of Les Modes Sold


Depicting an elegant woman at a racecourse, the present sheet is Georges de Feure’s design for the September 1902 cover of Les Modes, a high-end glossy Parisian journal, and is characteristic of magazine covers at the turn of the century. The central figure is elegantly dressed in fashion typical of the Art Nouveau style. As photography became more prominent, illustrators were given more freedom to creatively embody the idealized Art Nouveau forms and lifestyle on magazine covers, while photographs of couturier designs were included throughout the publications. This particular cover, entitled 'Aux Courses' ('At the Races'), builds anticipation of the Fall season; the opening editorial of the issue exclaims: ‘Les châteaux se repeuplent et la chasse est le grand sport du jour. Les grandes ouvertures se succedent les unes aux autres avec de trés brilliants résultats.’

Georges de Feure was known to be a habitué of the racecourses at Longchamp and Chantilly. A close stylistic comparison may be made with another gouache drawing of a woman at a race meeting of the same year, in a private collection.

Aux Courses: Design for the Cover of Les Modes