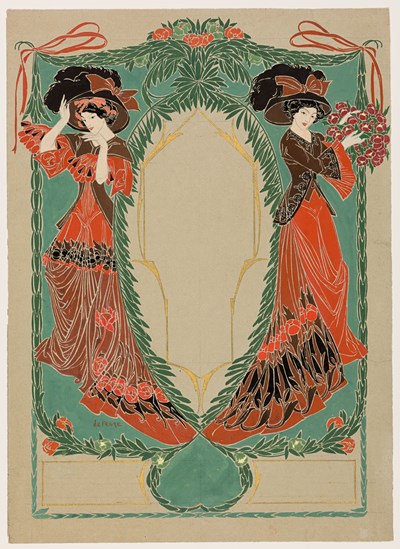 Two Elegant Women: Design for the Cover of Les Modes


This drawing is a design for the cover of the Christmas 1919 issue of the magazine Les Modes. The two women here depicted are influenced by the Japanese aesthetic that Georges de Feure adopted while working with Siegfried Bing, who had been a pioneer in establishing the influence of Japonisme on Art Nouveau. Between 1888 and 1891 Bing published the journal Le Japon artistique (or Artistic Japan), in French, English and German editions, and he was one the of the first importers of Japanese ukiyo-e woodcut prints, which many designers began to utilize in their collections. There were many exhibitions of Japanese stencil printed fabrics in Paris is the 1880s and 1890s, and these had a significant influence on fabric design.

De Feure produced numerous cover drawings for Les Modes over a period of several years. Founded by the art dealers and publishers Manzi, Joyant & Cie. and published monthly between 1901 and 1937, Les Modes (subtitled Revue mensuelle illustrée des Arts décoratifs appliqués à la Femme) was one of the leading French fashion magazines of the early 20th century. Each issue was devoted to ‘decorative art as applied to women’, and came to include both colour and black and white photographs of society figures and actresses modelling the latest Parisian fashions.

In addition to Les Modes and its sister publication Le Théatre, Georges de Feure contributed cover drawings for several other French journals, including Cocorico and Le Figare illustré (which devoted a special issue to the artist in February 1900), as well as the American magazine Dress, which was closely associated with Les Modes.

Two Elegant Women: Design for the Cover of Les Modes