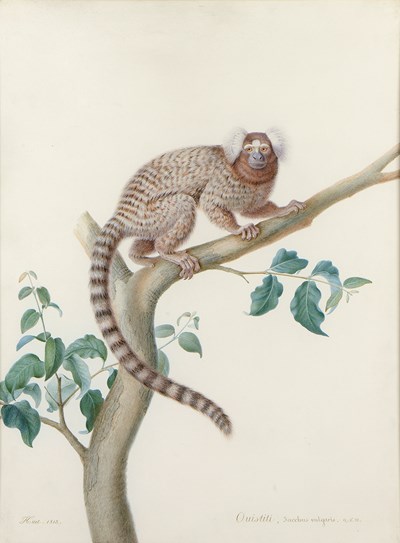 A Striated Monkey on a Branch Sold


Writing at the end of the 19th century, one art historian noted of Huet, in comparison with his older contemporary, the natural history artist Nicolas Maréchal, that ‘The works on vellum by Nicolas Huet may be the finest after those of Maréchal; sometimes he even does just as well and better than him. If he did not have the anatomical accuracy of Maréchal, he had something more precious perhaps from an artistic point of view: the gift of life; his animals, his birds, always have their familiar attitude, with which they are characterized: they live.’

The striated monkey is native to South America. A 19th century description noted, ‘This animal is no larger than a Squirrel. Its tail is long, thickly covered with fur, and beautifully marked, through its whole length, with alternate rings of black and white. The body is of a reddish ash-colour, slightly undulated with dusky shades. The face is flesh-coloured, and has on each side a large and thick tuft of milk-white hair, standing out before the ears. The paws, which are covered with hair, have sharp nails.’

The present sheet may be compared with a coloured engraving of Simia Ursina by Nicolas Huet, used as an illustration in Alexander von Humboldt and Aime Bonpland’s Voyage de Humboldt et Bonpland: Recueil d'observations de zoologie et d'anatomie comparée, published in Paris in 1811.

A Striated Monkey on a Branch