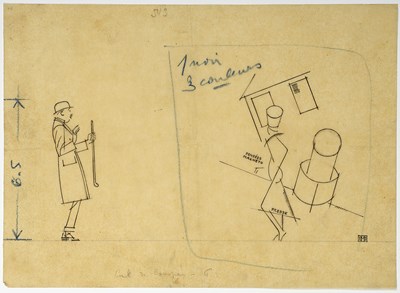 Pen and black ink, over an underdrawing in pencil, on papier calque.
Signed with the artist’s monogram BMB in black ink at the lower right.
Inscribed PENSÉES MAGNETO and PRESSE on the right hand figure.
Inscribed with measurements 6.5 in black chalk at the left edge and 1 noir / 3 couleurs in black chalk at the top centre.
Further inscribed Cul de lampe in pencil at the centre bottom edge and numbered 543 in pencil at the top edge.
185 x 257 mm. (7 1/4 x 10 1/8 in.)


This drawing was used to illustrate Henry Bidou’s short story ‘La peinture absolue’, published in the Gazette du Bon Ton of March 1920. The story conerns Luc, an artist, visiting an exhibition of Cubist paintings by the artist Jean Metzinger at Léonce Rosenberg’s Galerie l’Effort Moderne at 19, rue de la Baume in Paris. (Léonce Rosenberg had presented an exhibition of Metzinger’s Cubist paintings at l’Effort Moderne in January 1919.) He studies each canvas closely, and greatly admires Metzinger’s technique and rigorous compositions. Luc meets an old man who describes the work as ‘la peinture absolue’. He points out to Luc that Metzinger is not painting the thing but the idea of the thing, and that one must not copy, but paint the essence of things ('Il ne faut pas copier. Monsieur, il fait peindre l'essence même des êtres, et leur prototype éternel.’). Luc replies that he used to think this way in his youth, but then he became an Impressionist, and it is for this reason that his soul is not pure, unlike that of Metzinger. Luc departs the gallery with his vision of the universe altered, viewing everything he sees on the street in terms of lines, angles and geometry, and becomes a Cubist.

Another preparatory drawing for the same illustration is in a private collection.