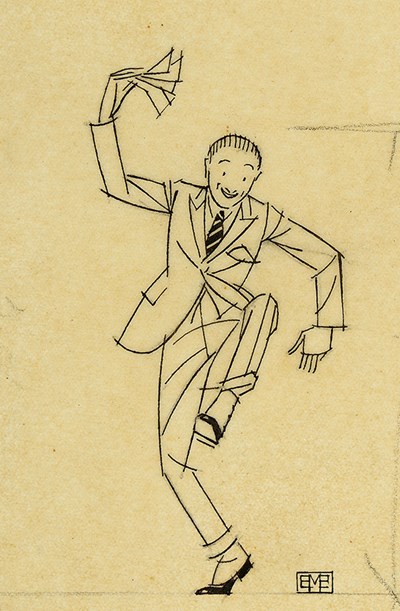 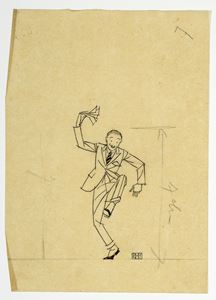 Pen and black ink, over an underdrawing in pencil, on papier calque.
Signed with the artist’s monogram BMB at the lower right.
Inscribed with measurements at the right edge.
186 x 133 mm. (7 3/8 x 5 1/4 in.)


The present sheet is a study for an illustration for a lighthearted article by the artist’s older brother Roger Boutet de Monvel, published in the Gazette du Bon Ton of January-February 1920. In this brief article, entitled ‘Pour les Fils de Familles’, Roger Boutet de Monvel explains that he would like to establish a sort of charity for poor soldiers who have returned from the War, to enable them to buy new clothes. (He explains that pre-war clothes, kept in closets for years, were often eaten by moths and ruined by time, while at the same time fashions changed and tailor’s prices grew ever steeper.) The man depicted in this sketch - delighted with his brand new suit, paid for by public donations - appears at the very end of the article.

Founded by Lucien Vogel in 1911 and first published in 1912, the Gazette du Bon Tonwas an monthly illustrated magazine devoted to fashion, elegance and art. Publication was suspended in August 1914, with the outbreak of war, and resumed in January 1920. As the modern scholar and collector Gordon Ray has described the magazine, ‘At the heart of each issue were 10 pochoirplates, but there were also essays, intended to amuse rather than to inform, on various articles of apparel, on the accoutrements of high life, indeed on choses d’élégance in general. There was a monthly review of theatrical costumes and settings, as well as a column of gossip devoted to fashion and good taste. The text of the pieces was made attractive by pochoir vignettes executed as carefully as the plates. In sum, the magazine represented a way of life, however rarefied and specialized.’

Boutet de Monvel had a long association with the magazine, for which he provided numeorus vignettes and illustrations. (Among the other artists involved in producing illustrations for the Gazette du Bon Ton were Pierre Brissaud, Georges Lepape, André-Edouard Marty, Charles Martin and George Barbier.) As has been noted of his illustrations for the magazine, ‘Boutet de Monvel’s work...was striking for the pared back and rectilinear qualities that were so characteristic of the sleekness of his style. In place of sinuous curves, elaborate volutes and glistening golds, he preferred the pure, controlled lines of a pale outline...This productive economy of means led him to also make color subordinate to line.’

As a brief comment in the English magazine The Studio noted of Boutet de Monvel in 1910, ‘He is par excellencethe painter of the Dandy, of his modish ways, of his elegance, to such an extent that one can imagine him as having been a friend of Beau Brummel, Lord Seymour, Eugène Sue, of Count d’Orsay or of Barbey d’Aurevilly…The artist has also done for the various papers some drawings, smart, funny, light and graecful, in which one sees Gallic wit coloured with a delightful note of English humour.’