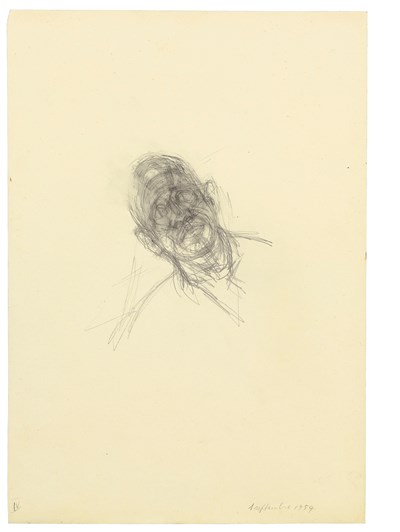 
In the 1950s Giacometti, who had previously only made portraits of close family members, began to produce portraits of a handful of other individuals with whom he had developed a close relationship, in particular several writers and critics. Jean Genet, Peter Watson, David Sylvester, James Lord and Isaku Yanaihara, as well as the photographer Ernst Scheidegger and the art dealer Marguerite Maeght, all sat for painted portraits by the artist. As has been noted of such portrait drawings, ‘Many of these sheets can be counted among the most intense works Giacometti produced.’

The French writer, playwright and poet Jean Genet (1910-1986) met Giacometti in 1953 or 1954, and the two became close friends. Abandoned by his parents and brought up in a foster home, Genet had by his teens become a petty thief and underwent periods of imprisonment for much of his youth, as well as a period of time serving in the French Foreign Legion. It was in prison that he began writing, which brought him to the attention of Sartre, who championed his work. As the artist’s biographer James Lord writes, ‘One day Giacometti came back in a state of considerable excitement to [his studio on] the rue Hippolyte-Maindron. He had seen Jean Genet in a café and been so impressed by his appearance that he was eager to do his portrait. It is not surprising. Genet had gone bald early. Alberto was especially attracted to bald heads, because absence of hair shows the structure of the skull. In Genet’s case it was fine, giving the face a density which concentrated to great effect his tough but gentle gaze…Alberto painted two portraits of Genet and made a number of drawings, all of them powerful representations of the confrontation between two extraordinary personalities.’

Giacometti provided a lithograph for the cover of Genet’s book Le Balcon, published in 1956, while the following year Genet wrote an essay entitled ‘L’atelier d’Alberto Giacometti’ which was first published in the review Derrière le Miroirand was later expanded into a book. Effectively the first monograph on the artist, Genet’s essay was, according to Lord, the one text concerning his work that Giacometti always thought most highly of.

Giacometti painted and drew a number of portraits of Jean Genet between the years 1954 and 1957, including three painted portraits of the writer; one in the Musée Nationale d’Art Moderne at the Centre Pompidou in Paris, another in the collection of Tate Modern in London, and a third in a private collection.

Three closely-related pencil studies by Giacometti of the head of Genet are known, two of which are, like the present sheet, dated 1 September 1954; one of these drawings is today in the Eberhard Kornfeld collection in Bern. All of these drawings are somewhat unusual among the artist’s portrait studies in that the sitter is not seen frontally, but instead with his head tilted to one side; evidence that Giacometti was particularly fascinated with the shape and structure of Genet’s bald skull. Two further portrait drawings of Genet, showing the writer seated in the artist’s studio, are dated 1957, while a pencil sketch of the writer also appears in a small sketchbook in the collection of the Fondation Giacometti in Paris.

As Genet later recalled of his sittings, ‘When they found out that Giacometti was doing my portrait (my face is apparently judged to be rather round and thick), people said: ‘He’ll give you a head like a knife blade.’…I am sitting up straight, immobile, rigid (if I move, he will soon call me back to order, to silence and to repose) on a very uncomfortable kitchen chair. Him. (looking at me with an expression of wonder): ‘How beautiful you are!’ He makes two or three brush strokes, without, it seems, ceasing to transfix me with his stare. Again, as if for himself, he murmurs: ‘How beautiful you are.’ Then he adds this remark, which amazes him even more: ‘Like everyone else, hey? Neither more, nor less.’’ Despite their friendship and mutual respect, Genet did not, however, pose very often for Giacometti. He apparently found it difficult to sit still for long periods in the wicker kitchen chair in the studio. Sometimes he blamed ill health, as when he complains of the flu in one letter to the artist: ‘I know I won’t have the strength to sit still in a chair for an hour. I am worn out.’

In another letter, Genet begs the artist’s forgiveness for his long absences from the studio: ‘My dear Giacometti, I am terrified at the idea of seeing you again. You must be in a frightful rage at me. For more than a month now, I have been putting it off every day, and I have had so many problems that I don’t know where to start first. Things are going badly, money, literature, my loves, and even my rotten health – everything is playing me up.’

Similarly, as the sitter of the present portrait has written of Giacometti’s draughtsmanship, ‘He draws only with pen or hard pencil, - the paper is often pierced and torn. The curves are hard, without softness, without gentleness. I think he regards a line as a man: he treats it as an equal. The broken lines are sharp and give his drawing – thanks to the granitic, and paradoxically muted matter of the pencil – a scintillating appearance. Diamonds. Diamonds even more because of the way he uses white…Extraordinarily chiseled gems. And it is white – the white page – that Giacometti has chiseled.’

The present sheet is accompanied by a certificate from the Comité Giacometti. The drawing is listed by the Fondation Alberto et Annette Giacometti in The Alberto Giacometti Database under No.3524.