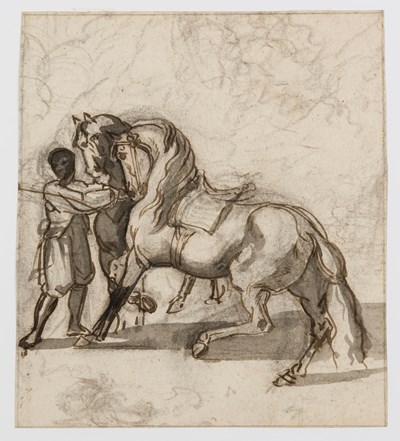 A Groom with Two Horses Sold


Théodore Gericault was, from a very early age, fascinated by horses, and became an accomplished equestrian. He may well have chosen to begin his artistic training with the painter Carle Vernet because of the elder artist’s reputation as a horse painter. As a young student he made drawings of horses at the Imperial stables at Versailles, and many of his most significant works as a mature painter involved equestrian subjects. As the scholar Philippe Grunchec has noted, ‘Throughout his career, Gericault painted and drew horses, beginning with the period of his apprenticeship to Carle Vernet and continuing up to his last, consummately finished watercolors.’ The same author has added that, ‘In fact, the life and art of Théodore Géricault are both indissolubly joined under the sign of the horse. Not merely content to observe the animal from every angle, in drawing after drawing and painting after painting, Géricault would in a certain sense dedicate his entire existence to the horse, from his earliest childhood to his premature and tragic end, brought on by an accident with – a horse.’

The attribution of this little-known drawing to Gericault was confirmed in 2001 by Lorenz Eitner, who dated the sheet to c.1814-1815. Dr. Eitner noted that ‘This composition of a (black?) groom holding two horses is, I believe, a fairly early work by Gericault. It exhibits the heavy, angular contour drawing that is characteristic of his work in pen and ink wash from around 1814/5. The drawing is not related, so far as I can tell, to any of Gericault’s known projects – certainly not to the Race of the Riderless Horses that occupied Gericault in 1816/7 and with which one might be tempted to connect its subject. It is, nevertheless, a strong and characteristic work in its energetic abbreviations, and even in its roughnesses and occasional incoherences (as in the horse’s legs).’

Among a handful of stylistically similar early pen and wash drawings by Gericault is a study of A Group of Cavalrymen and Officers in a private collection and a drawing of Louis XVIII Reviewing Troops on the Champ de Mars of c.1814-1815 in the Musée des Beaux-Arts in Lyon, as well as a pen and ink study of a horse drawn on the inside front cover of the so-called Zoubaloff sketchbook of c.1814-1815 in the Louvre. Also stylistically comparable is a study of two male nudes formerly in the collection of Hans Bühler and now in the J. Paul Getty Museum in Los Angeles. A horse in a nearly identical pose to that in the present sheet is found in a small painting attributed to Gericault in the Musée des Beaux-Arts in Béziers.

A Groom with Two Horses