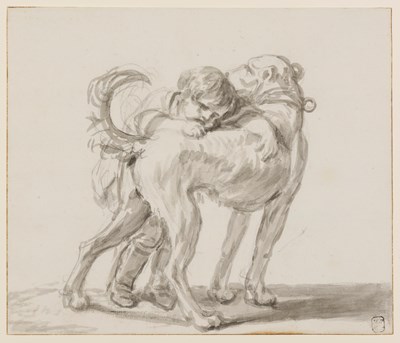 A Child Hugging a Dog Sold


This charming sheet, drawn in Greuze's favoured medium for compositional studies of brush and grey-black wash, is a study for the little boy embracing a dog at the right edge of a large compositional drawing entitled The Family Reconciliation (La réconciliation de la famille) of c.1770, in the collection of the Phoenix Art Museuma. It has been suggested that the Phoenix drawing was one of a pair of very large and highly finished genre drawings executed in brush and grey wash, together with its pendant, The Angry Wife (La Femme colère), today in the Metropolitan Museum of Art in New York. Probably executed both as finished drawings for sale and as designs for engravings, these two large drawings are thought to have been inspired by Greuze’s somewhat tempestuous family life, and the dog depicted in this drawing may have been a family pet.

In an earlier version of the composition of The Family Reconciliation, today in the Prat collection in Paris, the dog is absent, and the child is seen standing at a table. Another, much more sketchy compositional study for The Family Reconciliation, today in the Snite Museum of Art at the University of Notre Dame in Indiana, also excludes the dog. A very similar child and dog is also found in a large, finished drawing of The Paternal Blessing, or the Departure of Basile, exhibited at the Salon of 1769 and today in the Art Institute of Chicago. The dog in the Chicago drawing, however, faces to the left.

Dogs appear often in Greuze’s paintings and finished drawings, and the artist seems to have had a particular affection for them. Several studies of dogs were recorded in the sale of the contents of the artist’s studio in 1843, following the death of his daughter Caroline, and others are noted in Jean Martin and Charles Masson’s catalogue raisonné of Greuze’s work, published in 1908.

The first recorded owner of this drawing was Comte A. G. P. de Bizemont Prunelé (1752-1837) who, apart from being a collector of drawings, paintings and objets d’art, was also a talented amateur artist and engraver. He studied with Charles-Nicolas Cochin and produced some 150 engravings and a number of landscapes, including several views of Orléans. A number of drawings from his collection were left to the Musée des Beaux-Arts in Orléans. Although it does not bear his collector’s mark, this drawing may have later belonged tothe Parisian marchand-amateur Émile Louis Dominique Calando (1840-1898), since a pen and ink drawing closely matching its description was listed in the catalogue of the posthumous sale of his collection of mainly 18th century French drawings held in December 1899, which included ten sheets by Greuze.

A Child Hugging a Dog