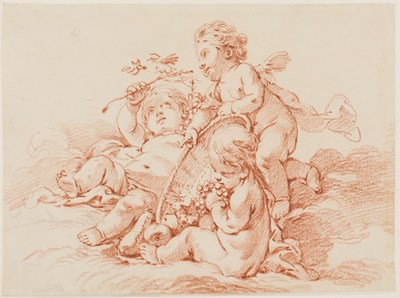 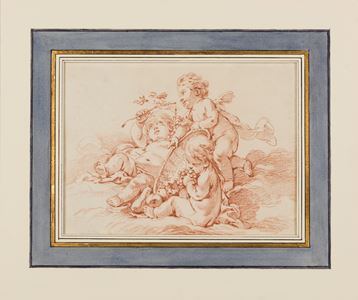 Autumn: Three Putti with a Basket of Grapes Sold


A fine and fresh example of Boucher’s draughtsmanship, the present sheet treats a favourite theme found throughout the artist’s oeuvre as a painter. As the Boucher scholar Regina Slatkin has written, ‘Babies and children are ever present in Boucher’s work, as they undoubtedly were in his real life, for he had three children of his own, and several young apprentices. He drew and painted them innumerable times - babies asleep and awake, playful, shy, sulking, tumbling about or nestling against their mothers. They were the winged cherubs in his Adorations, the amorettiin his mythologies, the genii in his allegories…Boucher’s sujets d’enfants proved so popular that no less than five Livres des groups d’enfants were engraved.’

This charming red chalk drawing is Boucher’s preparatory study for Autumn, one of a series of etchings of the Four Seasons by Louis Félix de La Rue, all after drawings by Boucher, that were published by Gabriel Huquier, the leading print publisher, engraver and collector in Paris for much of the 18th century. Datable to after 1745, the four etchings are among a series of various prints of putti after designs by Boucher, issued by Huquier in the form of cahiers, or sets. The preparatory drawings by Boucher for these prints, including the present sheet, all belonged to Huquier and were sold at auction following his death in 1772.

The present sheet appears to be the only extant preparatory drawing for the Four Seasons. A stylistically comparable red chalk drawing of Two Putti with Doves by Boucher was formerly in the collection of Max Loeb in Paris, while a counterproof of the Loeb drawing appears on the verso of a similar drawing of Two Putti in the Musée d’Art et d’Histoire in Geneva. Also similar is a drawing of Three Putti with Trophies, Palm Fronds and a Laurel Garland in a private collection in Brussels. The seated putto in the foreground of the present drawing is repeated in reverse (and thus likely based on the related etching of Autumn) in an overdoor painting of An Allegory of Autumn by Boucher and his workshop, signed and dated 1753, formerly in the Edmond de Rothschild collection in Geneva and today in the Metropolitan Museum of Art in New York.

Margaret Morgan Grasselli has noted that ‘No other eighteenth-century artist…depicted children so frequently and to such varying effect: to parody adult activities; to allegorize the seasons, the time of day, the four elements, and the arts; to enliven, observe, attend, and comment on mythological or historical events; or simply to show them being children.’

Autumn: Three Putti with a Basket of Grapes