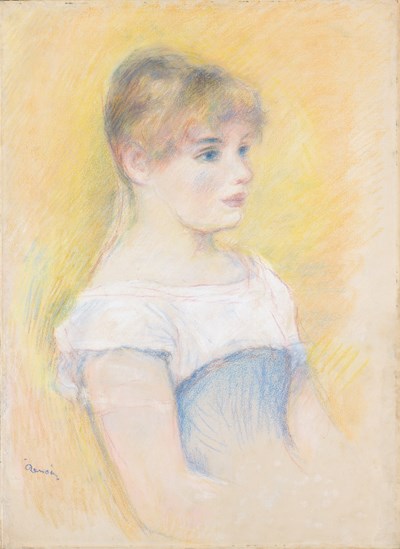 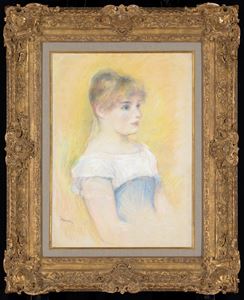 
Renoir began using pastels around 1874, and tended to use the medium for portraits of close family and friends. As François Daulte has written of the artist's early pastel portraits, 'If he frequently utilized that medium to depict those near and dear to him it was because pastel, which combines colour with line, gave him the possibility of working rapidly and catching in all their vividness the rapid flash of intelligence and the fleeting shadow of emotion. Employing an extremely sober range of colours - mostly blacks, blues and jade greens - Renoir probes his sitters to their very soul and offers them boldly to our gaze. He brings them to life and makes us feel their presence.' Similarly, as Christine Ekelhart has noted of Renoir as a portraitist, 'He preferred to use pastels, consciously referring to the tradition of the eighteenth century, a time when pastels enjoyed a flowering in France, particularly in portraiture. Emphatic painterly qualities and an extreme close-up perspective lend these portraits a strong immediate presence, creating a direct relationship to the viewer.'While he seems to have regarded his chalk drawings and watercolours as exercises towards his oil paintings, Renoir saw his pastels are finished works of art in their own right. At his first one-man show, held at the gallery of La Vie Moderne in 1879, the artist showed mainly pastels, including a number of portraits.This pastel portrait is thought to depict Jeanne Samary, a popular and successful actress at the Comédie-Francaise who was one of Renoir's favourite models in the late 1870s. Léontine Pauline Jeanne Samary (1857-1890), joined the Comédie-Française at the age of eighteen, and soon achieved a level of celebrity underlined by the writer and theatrical director Jules Claretie's description of her as 'the muse of the Comédie; she had the smile of Marivaux, the imagination of Regnard, the wit of Molière, she was a star of contemporary art.'Jeanne Samary lived with her parents on the rue Frochot, just a few metres from Renoir's studio on the rue Saint-Georges, until 1880. Renoir painted around a dozen portraits of Samary, in both oil and pastel, notably a full-length oil portrait, painted in 1878, now in the collection of the Hermitage in St. Petersburg. After her marriage in 1880, however, Renoir seems to have largely stopped painting Samary, whose attentions were now devoted to such painters as Carolus-Duran and Jacques-Emile Blanche.Two other pastel portraits of Jeanne Samary by Renoir are known; one which was sold at auction in London in 1990 and the other formerly with the 20th century Parisian art dealer Etienne Bignou.