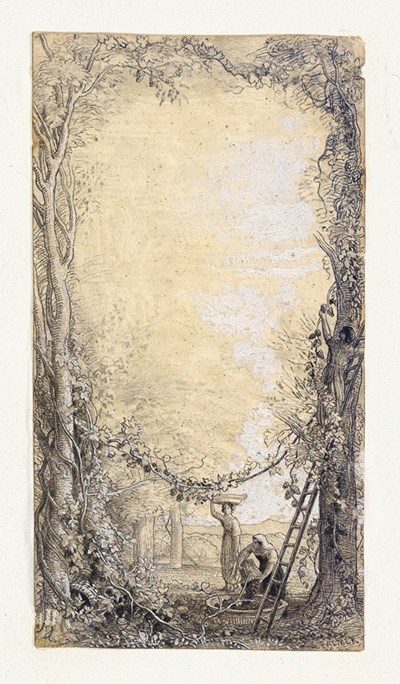 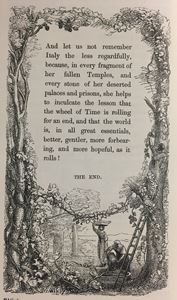 The Vintage: An Illustration for Charles Dickens's Pictures from Italy


In March 1846, at the recommendation of the art dealers and print publishers Colnaghi's, Charles Dickens approached Samuel Palmer and asked him to supply vignette illustrations for his forthcoming book Pictures from Italy, for which he would be paid twenty guineas. (As Dickens noted, in a letter written to his publishers Bradbury and Evans on 16th March 1846, 'I have thought it best to go to Colnaghi's, and ask if they could find me any clever young artist who has been to Italy, and has brought home a portfolio of such sketches as I want. I did so on Saturday and he assures me that he has little doubt of sending some such gentleman to me tomorrow.') Palmer produced four small illustrations for the book; depicting the Colosseum, the Villa d'Este at Tivoli, a street of tombs in Pompeii and a vineyard scene. This drawing is a preparatory study for the last of these, which, integrated with the text, appeared on the final page of the book [see image]. Although it was the only one of the four illustrations not to bear a title, it has generally been known as The Vintage. Dickens seems to have been pleased with the illustrations, and when Palmer asked if his name might be included on the title page of the book as the illustrator, he replied in a letter to the artist: 'I beg to assure you that I would on no account dream of allowing the book to go to Press, without the insertion of your name on the title page. I placed it there myself, two days ago. I have not seen the designs, but I have no doubt whatever (remembering your sketches) that they are very good.'As Raymond Lister has written of the present sheet, 'As was usual, Palmer drew the subjects for Pictures from Italy on the woodblocks and these drawings were of course destroyed as the block was engraved; but master drawings exist, of which this is one. The contrast between them and the finished engravings is enormous: the drawings are executed as delicately as miniatures, while the engravings are of mediocre quality…The Vintage is the most poetic of the designs. Its conception - as a frame for the reading matter - was probably derived from similar arrangements in Blake's Songs of Innocence and Experience, and the figure in the tree at the right picking fruit may be paralleled by figures in plate 2 of 'The Ecchoing Green' and on that of 'The School-Boy' in the same work, and in plate 2, 'The Argument' in The Marriage of Heaven and Hell. More general influences in these designs may be traced to Claude.' Another scholar has noted of the illustrations to Pictures from Italy that, 'although Palmer's illustrations are capable of standing alone aesthetically as pleasing Italian scenes, taken in conjunction with the text, they dramatize inadvertently Dickens's perception of the country as a land of physical and moral decay, unlikely to be regenerated by its political or religious leaders. Though the artist's representations of 'The Street of the Tombs: Pompeii' and 'The Colosseum of Rome' appear separate from the text, not integrated with it like the other two designs, they nevertheless reinforce the author's association of past ruins with the desolation of the present rather than the grandeur of antiquity. Similarly, the cypresses linking the avenue leading toward 'The Villa d'Este at Tivoli, from the Cypress Avenue' evoke their traditional associations with death as well as beauty. Only the concluding 'Vineyard Scene', a suitable visual accompaniment to Dickens's closing hope that a more noble race might rise from these ruins, is wholeheartedly optimistic with its explicit associations of rebirth and renewal.'All four preparatory drawings by Samuel Palmer for Dickens's Pictures from Italy were once part of an album or scrapbook of English drawings by various artists that belonged to Caroline Scott Ellis (1786-1874), the daughter of the art dealer Paul Colnaghi, in 1858. The drawings from this album later appeared at auction in London in 1963. Two of Palmer's drawings for Pictures from Italy, depicting the Villa d'Este at Tivoli from the Cypress Avenue and The Colosseum of Rome, are today in the Pierpont Morgan Library in New York. Another, less finished drawing by Palmer also intended for Dickens's Pictures from Italy - a pencil sketch of a View in the Campagna, likewise in the Pierpont Morgan Library - may have been engraved for the book, but never appeared in the printed edition.

The Vintage: An Illustration for Charles Dickens's Pictures from Italy