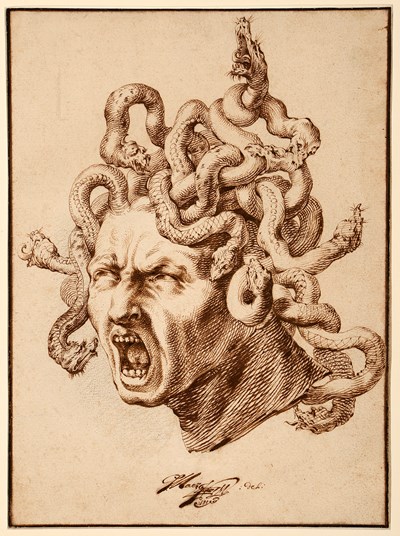 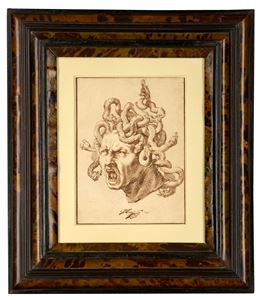 The Head of Medusa Sold

ACQUIRED BY THE ART INSTITUTE OF CHICAGO.


A tour de force of bold penwork, this extraordinary sheet may be ranked among the finest known drawings by Godfried Maes. Highly finished and elaborately signed and dated, with drawn framing lines, it must have been produced by the artist as an autonomous work of art, to be sold to a collector. Indeed, the present sheet can be regarded as a successor to a type of sophisticated drawing known as a 'federkunststuck' – an elaborate pen and ink drawing made as a virtuoso imitation of an engraving – produced by such artists of the previous generation as Hendrick Goltzius and Jacob Matham.Maes treated the subject of the Gorgon Medusa in at least two other drawings, both from the series of finished composition drawings of scenes from Ovid’s Metamorphoses. A drawing of Perseus Flies Away with the Head of the Medusa was sold at auction in Paris in 2012, while a drawing of Perseus Shows the Head of Medusa is in the Rijksprentenkabinet in Amsterdam. Another of Maes’s drawings of Ovidian subjects, Athamas Tearing Apart his Children, depicts a similar figure of Tisiphone, one of the Three Erinyes, or Furies, of Greek mythology, who had snakes for hair; the drawing was recently on the Paris art market.

The Head of Medusa