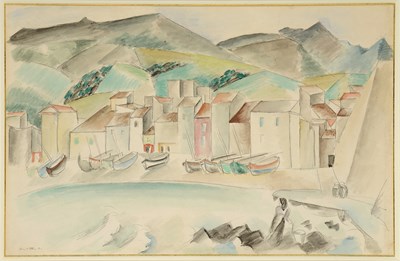 
In the early part of the 20th century, the small Mediterranean port town of Collioure in France, very close to Spain, was a popular destination for artists such as Georges Braque, André Derain, Othon Friesz, Henri Martin, Paul Signac, Léopold Survage and, most notably, Henri Matisse. Lhote must have visited Collioure more than once, since he produced a handful of paintings of this picturesque Catalan fishing village, albeit each one different in composition from the present sheet. A painting of Collioure is in the Musée Fabre in Montpellier, while a different view of the port, dated 1917, was with the Marlborough Gallery in London in 1958 and was included in the Lhote retrospective exhibition in Paris that year. Another painting of Collioure by Lhote, datable to c.1920, was sold at auction in London in 1990. This watercolour is recorded in the archives of the late Jean-François Aittouarès, and its authenticity has also been confirmed by Dominique Bermann Martin, who will include it, under no.109, in her and M. Aittouarès’s forthcoming catalogue raisonné of the work of André Lhote.

Literature:
To be included in the forthcoming catalogue raisonné of the work of André Lhote, by Dominique Bermann Martin and the late Jean-François Aittouarès.