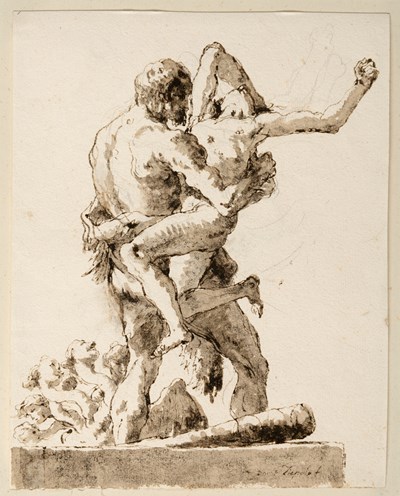 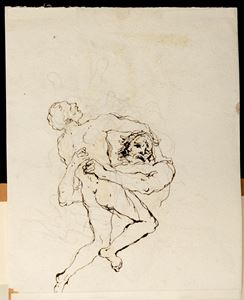 
This splendid double-sided sheet may be added to a series of drawings of Hercules and Antaeus by Domenico Tiepolo that have been dated to the latter part of the artist’s career. The subject is taken from the deeds of the mythological Greek hero Hercules, who was challenged to a wrestling match by the invincible Libyan giant Antaeus. Hercules was able to defeat Antaeus, whose strength was drawn from contact with the earth, by lifting him off the ground and crushing him. The theme of Hercules and Antaeus must have greatly appealed to Domenico, as he created a large number of drawn variations of the subject. The largest single group of these, numbering thirty-eight drawings and likely to have included the present sheet, were once in a small album formerly in the Henri Bordes collection and purchased by Colnaghi’s from Paul Prouté in 1936. The Bordes album was broken up and the drawings dispersed among public and private collections between 1936 and 1945, and examples are today in the Fogg Art Museum in Cambridge, Massachusetts, the Metropolitan Museum of Art in New York, the Ashmolean Museum in Oxford, the Fondazione Giorgio Cini in Venice, and elsewhere. Apart from the drawings in the Bordes album, a number of other drawings of this subject are known, most of which are numbered, unlike those in the album. Indeed, a handful of drawings from the Hercules and Antaeus series were known before the appearance of the Bordes group in 1936. This series of drawings of Hercules and Antaeus by Domenico Tiepolo does not relate to any painting or fresco by the artist, and may instead be counted among the many pen and wash drawings – all variations on a theme – that the artist produced in the second half of his career. James Byam Shaw has suggested that this particular series of drawings may have been inspired by a drawing or print after a sculptural group of Hercules and Antaeus, such as a small bronze by the Renaissance sculptor Antico, known in several casts. It may also be noted that, early in his career, Domenico’s father Giambattista Tiepolo had painted a large canvas of Hercules and Antaeus for the salone of the Palazzo Sandi in Venice, executed between 1725 and 1726, and today in a private collection.Byam Shaw has further opined that these Hercules and Antaeus drawings may have been related to the decoration of the Tiepolo family’s country villa at Zianigo, on the Venetian terraferma. Many of the drawings depict the two struggling figures on the same sort of ledge that appears in other drawings by Domenico, mostly of animals, that are also thought to have possibly been intended for the fresco decoration of the Zianigo villa. As he notes, ‘It seems possible, therefore, that the subject was at least conceived as a suitable one for the decoration of that villa, and that the series was drawn at a relatively late date in Domenico’s career.’It may also be relevant, however, that the base on which these figures stand is akin to the pedestals used in contemporary garden statuary. As Linda Wolk-Simon has noted of Domenico’s Hercules and Antaeus drawings, ‘the protagonists are on a base or ledge reminiscent of the pedestals of garden sculptures or of the balustrades of Venetian villas, which were usually adorned with statues of deities, allegorical personifications, and rustic figures...Hercules was a favorite subject for Venetian garden sculpture, occurring frequently in the work of Domenico’s contemporary [Orazio] Marinali and in that of other sculptors of the period...[and] an immediate and relevant model undoubtedly presented itself in these ubiquitous Venetian settecento villa garden sculptures.’