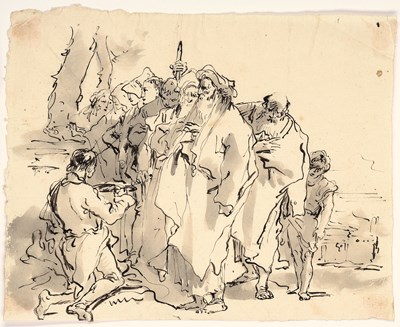 A Servant Before a Group of Orientals Sold


The present sheet may tentatively be grouped with a number of early drawings by Domenico Tiepolo – most of which are, however, drawn in pen alone, without wash – that depict crowds of figures in Oriental or antique dress. The subject of these drawings has proved elusive, while their purpose remains similarly a mystery. They seem, however, to be inspired by Giambattista’s series of etchings known as the Scherzi di fantasia, produced in the late 1740s, but not published until after his death in 1770. As James Byam Shaw has noted of a pair of drawings of similar subjects in the Robert Lehman Collection at the Metropolitan Museum of Art in New York, ‘Their purpose is not entirely clear; but it seems certain that the subject is inspired by Giambattista Tiepolo’s series of etchings called Capricci and Scherzi di fantasia...It is evident that once the prints were published they remained in some respects a source of inspiration to Domenico throughout the early years of his career – beginning about 1747, when at the age of twenty he was already painting the Stations of the Cross in San Polo, Venice.’ These drawings also manifest the younger Tiepolo’s lifelong fascination with ‘Oriental’ characters in his work. Other examples of this group of ‘Oriental’ crowd scenes by Domenico Tiepolo are in the Rijksmuseum in Amsterdam, the Kupferstichkabinett in Berlin, the Fitzwilliam Museum in Cambridge, the Ashmolean Museum in Oxford and the Museo Civico in Trieste.Among stylistically comparable pen and wash drawings by Domenico Tiepolo are two studies of A Priest in Antique Dress Leading a Group of Men and Boys and A Crowd Gathering Towards an Altar; both in the collection of the Beaney House of Art and Knowledge (formerly the Royal Museum and Art Gallery) in Canterbury in Kent, and a Study of a Crowd formerly in the collection of the Duc de Talleyrand and sold at auction in New York in 2002. Also similar in handling and effect is a drawing of A Scene from the Life of Christ in the Staatsgalerie in Stuttgart, while a somewhat similar composition occurs in a drawing by Giambattista Tiepolo in the Museo Civico Sartorio in Trieste. The present sheet was once part of a group of twenty-six Tiepolo drawings that were mounted into an album - together with miscellaneous Old Master drawings by several other artists – assembled in England in the late 18th century, and eventually in the possession of Sir Gilbert Lewis (1808-1883). On his death in 1883 the album, which included several drawings of dense crowds of figures in Oriental costume by Domenico, was inherited by his nephew, Sir Henry Duff Gordon. The Tiepolo drawings in the Duff Gordon collection, mainly drawn in pen and ink or pen and wash, were first noted and described in an article published by Paul Oppé in Old Master Drawings in 1930.

A Servant Before a Group of Orientals