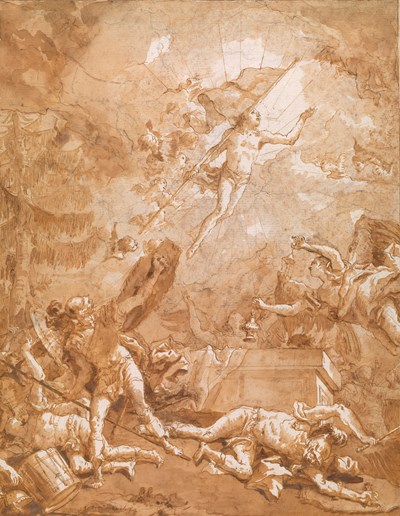 The Resurrection of Christ Sold


Executed with an assurance of handling and a fluidity of tonal washes that is often quite breathtaking, the drawings of the ‘Large Biblical Series’ are among Domenico Tiepolo’s masterpieces as a draughtsman. Set in elaborate interiors or landscapes, and often crowded with figures, these highly pictorial compositions were almost certainly intended as independent works of art. Using large sheets of handmade paper of the same size (approximately 460 x 350 mm.) as he used for his contemporaneous Punchinello series of drawings, but oriented vertically, the artist began each of the drawings of the ‘Large Biblical Series’ with a rough outline drawing in black chalk. He followed this with pen outlines, with the most important figures in the foreground executed first, and those in the background last. The washes were usually applied in several overlapping and complex layers, from light tones to dark, with areas of the bright white paper left in reserve, as highlights. A superb example of Domenico’s vigorous draughtsmanship, this large sheet, in the words of one recent scholar, ‘is one of the most spectacular drawings from this enormous “New Testament” project...Christ’s body, liberated from the sepulchre, soars heavenward, emanating rays of mystic light. He clutches a triumphal banner adorned with the Cross, while cherubs and angels witness and celebrate his victory. The astonished soldiers, guardians of the tomb, are thrown back felled by the overpowering burst of light...The drawings of both Giambattista and Domenico Tiepolo are celebrated for their highly expressive use of transparent ink washes laid down on brilliantly white paper...In the Resurrection, the transparency of the washes allows the black chalk underdrawing, particularly the aureole around the levitating Christ, to read as an essential part of the final image. Reserves of untouched blank paper reflect light, portraying the dazzling intensity of the illumination and powerfully modeling the figures.’This large drawing of The Resurrection of Christ was also singled out by the late George Knox, in his survey of the entire ‘Large Biblical Series’, as ‘notable for the extremely brilliant use of the white paper in the handling of light’. Here, the body of Christ and several of the figures below him are all bathed in a bright, radiant light; an effect created purely by the artist leaving parts of the surface of the white paper untouched by ink or wash. As Knox goes on to describe the scene, ‘Using his shield to block Christ’s blinding supernatural light, a soldier runs from the stunning apparition of Jesus soaring out of his tomb. His companions have fallen to the ground. One angel spreads incense and another rejoices as Jesus, accompanied by seraphim, glides upwards...Alluding to immortality, a majestic evergreen stands at the left.’The Tiepolo scholar Adelheid Gealt, who has aptly described the present sheet as ‘a masterpiece of light and movement’, has further pointed out that the composition is highly original. As she notes of this drawing, unlike the traditional visual history of this subject, Christ is here portrayed looking upwards rather than down, so that Domenico’s emphasis is on Christ’s new status - corporal but more spiritual - as He ascends into Heaven.The compositions of the drawings of the ‘Large Biblical Series’ display the artist’s wide-ranging study of a variety of visual sources. Inspiration was derived from, among other sources, the Byzantine mosaics in the Basilica of San Marco in Venice and the extensive collection of 16th and 17th century prints kept in the Tiepolo studio, while Domenico also adapted motifs from the paintings and drawings of his father, and occasionally recycled images from his own work. Indeed, some aspects of the composition of the present sheet are found in an earlier drawing by Domenico of The Resurrection of Christ, of much smaller dimensions, which is today in a Swiss private collection5. As Knox noted of the artist, ‘his most extensive and perhaps his most remarkable work as a draughtsman...The Large Biblical Series is a summation in more ways than one. For the first time, Domenico draws on the full resources of the Tiepolo studio, his own visual memory, his folios of drawings, and the vast accumulation of drawings by his father...Even so, by far the greater part of these compositions are entirely original inventions.’ The present sheet was one of fifty-nine drawings from the ‘Large Biblical Series’ selected for a remarkable exhibition devoted to the series, held at the Frick Collection in New York in 2006-2007; an event which provided a rare opportunity to see, displayed together, some of the finest drawings in the sequence. As Gealt has written, ‘While each drawing is a masterpiece of composition and draftsmanship, its real value, as part of an unfolding narrative with rich visual connections to other drawings in the series, can only be appreciated when viewed in its original context.’ The sheer scale of the ‘Large Biblical Series’, and the virtuosity and creativity evident in each of the over three hundred and twenty drawings, has led one scholar to describe the project as ‘an exceptional resumé of all [Domenico Tiepolo’s] artistic powers of invention.’

Provenance:
Among the contents of the artist’s studio in Venice at the time of his death, and by descent to his wife, Margherita Moscheni, VeniceSold on the Venetian art market in the first half of the 19th centuryPresumably Victor Luzarche, ToursPresumably Camille Rogier, ParisPresumably Roger Cormier, ToursPresumably his sale, Paris, Galerie Georges Petit, 30 April 1921Anonymous sale, Paris, Hôtel Drouot, 13 March 1995, lot 223Thomas Williams, London, and W. M. Brady & Co., New York, in 1995Private collection.

The Resurrection of Christ