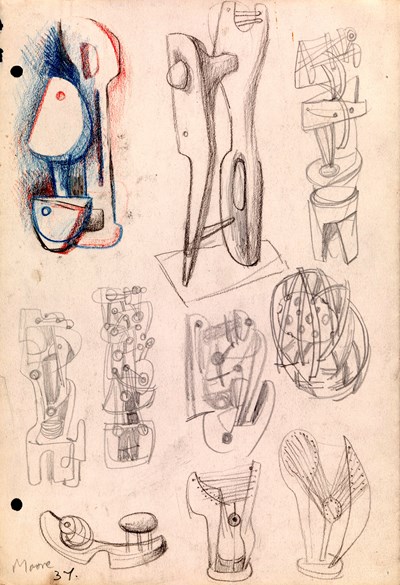 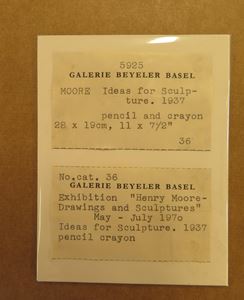 
Drawn in 1937, this fascinating sheet of sketches has been characterized as containing ‘some of the most innovative designs that were never made’ by the sculptor. As with many of Moore’s drawings for sculptures, ideas and motifs in one sheet of studies are often repeated and developed in other drawings. The central form on the uppermost row in the present sheet - ‘an abstracted image of a copulating couple’, as it has been described – reappears in two other important drawings of the same date. The same form is found towards the left foreground of a large composition entitled Drawing for Metal Sculpture, in a private collection, and again at the right of the large drawing Five Figures in a Setting in the Henry Moore Family Collection. Similarly, three other elements studied in this drawing – the right-hand form in the top row, as well the second and fourth forms from the left in the middle row - are further developed in a larger and more finished Drawing for Metal Sculpture, drawn in chalk, watercolour and crayon, which was executed the following year.Despite the wealth of sculptural ideas expressed in this drawing, none of these elements appear to have been translated into actual finished works. This is often the case with Moore’s drawings of studies for sculpture, which, as one scholar has pointed out, when taken together contained ‘[a] profusion of ideas which would require a dozen lifetimes to realise in three dimensions.’ Nevertheless, as Andrew Causey has noted of Henry Moore’s drawings of 1937 in particular, ‘at no other point in Moore’s work are there so many strange, imaginative shapes that have independent circulation in drawing without emerging into sculpture.’In her comprehensive catalogue raisonné of Henry Moore’s drawings, the artist’s niece Ann Garrould noted of the present sheet that it is ‘the first of many drawings dated between 1937 and 1940 bearing a pair of punched holes along one edge, whose significance has not been determined; some are single pages of approximately 280 x 190 mm....others are double this size with a fold down the middle...Another group of drawings are double page in size but without the centre fold...Many of these drawings can be linked stylistically but no attempt has been made to reconstitute them as sketchbooks.’A sheet of studies such as the present sheet provides a valuable insight into Moore’s creative process, and the way in which he developed his designs and motifs. As the sculptor once stated, ‘If an idea really means something to you, it returns and if it returns two or three times you do something about it. If you begin drawing in a sketchbook with the idea of tapping yourself for ideas, sometimes they come so many and so easily that to judge them would be silly. One must let them happen and then judge them in a week, a month, or two months and then pick out from that little set of suggestions those that still mean more than any of the others.’