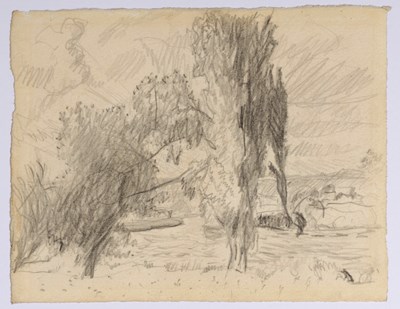 Landscape on the Seine near Vernon Sold


In 1910 Bonnard began renting a house known as ‘Ma Roulotte’ (‘my gypsy caravan’) in the village of Vernonnet, just across the river Seine from the larger town of Vernon, near Giverny in Normandy. He bought the house outright in 1912, and worked there for the next sixteen years. The house enjoyed splendid views of the Seine, and Bonnard painted several views from its wooden balcony and windows. As Nicholas Watkins has noted, ‘He got to know the river extremely well on his daily walks and often explored it in his boat, kept on the little tributary, the Bras de ma Campagne, running between the Île Saint-Pierre and the bottom of his garden.’ Bonnard also made countless drawings of the views from of Ma Roulotte, many of which do not relate to a finished painting. Vernon was only three kilometres from Giverny, where Claude Monet lived and worked for thirty years, and the two artists became close friends. Bonnard sold the house in 1939, when he moved permanently to the South of France.

Landscape on the Seine near Vernon