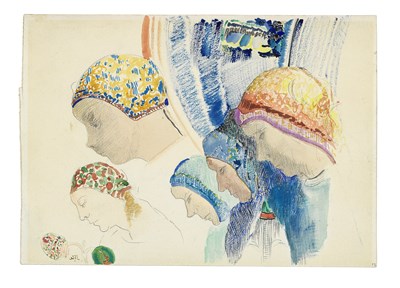 
Although Odilon Redon had worked in watercolour as a youth at the beginning of the 1860s, it was not until some thirty years later that he began again to work seriously in the medium. His watercolours, however, reflect a more reserved side of his experiments with colour, and his work in this fluid medium seems to have been done largely for his own pleasure. Redon’s use of the watercolour medium is largely confined to the later years of his career, when, as has been noted, ‘he turned from working primarily in black to enthusiastically embrace color. Indeed, the watercolors seem to have had a somewhat more private role in his oeuvre than his work in other media. Although he discussed his noirs, or fusains (charcoal drawings), his prints, pastels, and paintings in his correspondence – and in his posthumously published writings on art – watercolor is never discussed. The mature watercolors, however, treat themes that concerned the artist throughout his career, and some...are complete and accomplished works of art.’ Redon’s late watercolours were retained by the artist until his death and never exhibited in his lifetime. After his death, a number of examples were sold by his widow to private collectors such as Jacques Zoubaloff. Redon’s watercolours were first seen by the public only in posthumous exhibitions of his work, such as that held at the Galerie Bernheim-Jeune in April 1917, in which the present sheet was included.This watercolour may be related to a number of works by Redon, mostly dating to after 1905, in which a female profile wearing a similar cap appears, such as a large pastel of A Woman with a Blue Bonnet in the Louvre. Similar bowed or downcast heads in profile are, however, almost a leitmotif of Redon’s oeuvre, and appear throughout his later work in colour, such as an oil painting of the Virgin in the Musée d’Orsay, on deposit at the Musée des Beaux-Arts in Bordeaux. Very similar heads are also found in such drawings as a Tête Mystique on the art market in London in 1963 and a noir drawing of a Head Wearing a Phrygian Cap, on a Salver of 1881 in the Art Institute of Chicago.This watercolour was last exhibited in 1931, and has remained unseen by most modern scholars. It may have come from the same sketchbook or sketchbooks as several stylistically comparable watercolours, of similar dimensions, in the collections of the Musée des Beaux-Arts de la Ville de Paris and the Musée d’Orsay.The first recorded owner of the present sheet was the Belgian violinist and composer Armand Parent (1863-1934), who was among a small group of early collectors of Redon’s work, and eventually came to own around twenty pastels, charcoal drawings and watercolours by the artist. In 1900 Redon drew a portrait of Parent in red chalk, which he dedicated to the sitter several years later, in 1913. Parent’s collection, which also included works by André Derain, Paul Gauguin, Henri Matisse, Amedeo Modigliani, Georges Rouault and Edouard Vuillard, among others, was dispersed between 1920 and 1950. The drawing then entered the collection of the American architect John Augur Holabird (1886-1945).