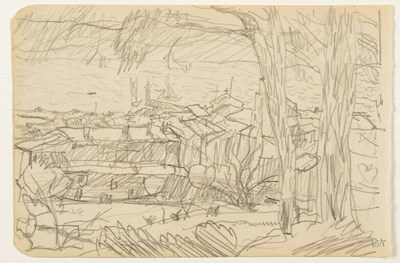 View of the Town and Bay of Saint-Tropez


In 1904 Pierre Bonnard made his first visit to the South of France. Together with Edouard Vuillard, he visited their fellow Nabis artist Ker-Xavier Roussel in Saint-Tropez, and also met Louis Valtat and Paul Signac. Captivated by the light and landscape of the Midi, which was different from anything he had painted before, Bonnard returned to Saint-Tropez for a longer stay in the summer of 1909 as the guest of Henri Manguin. From then on he was to spend a large part of his career in the South of France, painting yearly on the Côte d’Azur; in Saint-Tropez, Antibes, Grasse and at Le Cannet, in the hills above Cannes, where he purchased a villa in 1925.This drawing comes from a sketchbook used by Bonnard in 1921, which included other drawings of Saint-Tropez and the French coastline, as well as several views of Rome (some of which relate to a large painting of the Piazza del Popolo, Rome, painted in 1922 and today in a private collection). The artist spent the period between December 1920 and March 1921 staying with Manguin at Saint-Tropez, before spending a fortnight in Rome at the end of March. As Bonnard told a visitor to his studio in 1937, ‘I do these sketches outdoors as soon as I find a light effect, landscape, or atmosphere that moves me...It’s a matter of noting down whatever strikes you as quickly as possible. Then afterward you take a single color as a point of departure and compose an entire painting around it. Color has a logic as exact as that of form. One must not give up before capturing the first impression.’

View of the Town and Bay of Saint-Tropez