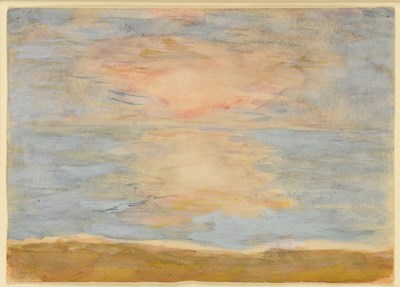 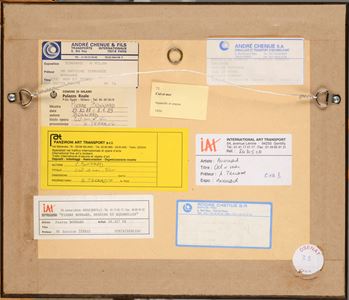 Study of Sea and Sky Sold


Probably datable to the early 1930s, this small, vibrant watercolour is likely to have been drawn in the south of France, where Pierre Bonnard spent a large part of his later career. He painted yearly on the Côte d’Azur; at Saint-Tropez, Antibes, Grasse and at Le Cannet, in the hills above Cannes, where he purchased a villa in 1925. As one scholar has noted, ‘Le Cannet was crucial to the evolution of Bonnard’s notion of landscape or, to be more precise, of a pure Mediterranean landscape. Early in February 1935 he wrote to Matisse, ‘Right now I stroll around the countryside and try to observe it like a farmer.’ In late March of the same year he confided to Vuillard, ‘I have become a landscape painter not because I have painted landscapes – I have only painted a very few – but because I have acquired the soul of a landscape painter and have begun to get rid of the picturesque, the aesthetic, and other conventions that have poisoned me.’”Bonnard began working in the medium of watercolour in the 1920s, but especially so in the following decade, when his friend and patron Arthur Hahnloser gave him some watercolours while the artist was recuperating from a hospital visit in 1930. The artist seems to have found working in the transparent medium of watercolour, which needed to be applied quickly and which could not be easily corrected, somewhat antithetical to his usual slow and methodical method of working. (As he said, ‘Manet could do it. I just don’t have the gift.’) He eventually found that it was easier to combine watercolour with gouache, which allowed him to layer colours over several sessions, and enabled him to approximate the intensity of tone that was a characteristic of his late painted landscapes in oil.In the catalogue of the exhibition 'Bonnard retrouvé', held in Toulouse in 1997, in which this watercolour was included, Philippe Cros wrote about the present sheet: ‘the watercolour entitled Sea and Sky is characteristic of Bonnard’s increasing taste for light at this stage of his life. By this means, he confessed his admiration for the paintings of the Impressionists, but it is abundantly clear that he diverged from their resolutely objective vision to endow colour with a very different role. Although still so tenuous, the colours begin to vibrate in the light, foreshadowing the explosion of colour in the years to come.’ Among a handful of stylistically comparable watercolours by Bonnard, of similar small dimensions, is a Landscape (The Little House) of 1922 and a View of the Mouth of the River Touques at Trouville of c.1935; both are in private collections.

Provenance:
By descent from the artist to his nephew, Charles Terrasse, ParisBy descent to his son, Antoine Terrasse, FontainebleauThence by descent until 2015.

Study of Sea and Sky