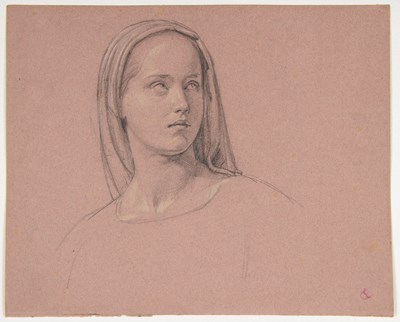 Pencil, with touches of white heightening, on dark pink-toned paper. The verso in pencil, with the main figure squared for transfer in white chalk.Signed or inscribed E Daege in pencil on the verso.209 x 257 mm. (8 5/8 x 10 1/8 in.)


Eduard Daege was a gifted draughtsman, working mainly in pencil. A stylistic comparison may be made between the present sheet and a portrait drawing by the artist depicting three students of Friedrich Schinkel, drawn in Rome in May 1833.This drawing bears the collector’s mark of the banker, poet and art historian Walther Heinrich (1872-1939), who wrote under the pseudonym Walther Unus. The nucleus of his collection of drawings was a group of sheets by 19th century German artists.