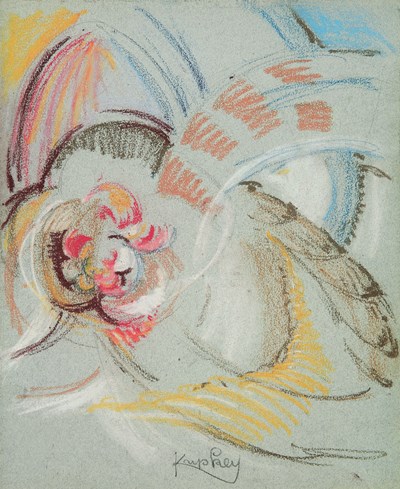 
Working more often in pastel and gouache than in oil, František Kupka created works in series based on a particular visual or chromatic theme. As one modern scholar has commented, ‘Kupka often worked simultaneously in thematic series, including vertical planes, verticals and diagonals, circular and curvilinear compositions, and cosmological abstractions which sometimes merged into each other even within the same painting.’ He identified an underlying cosmic order that was composed of a ‘kaleidoscope of changing light, colour forms, and space’, and his ideas about cosmic rotation are, in particular, a significant part of his art. This pastel may be associated with an important series of drawings – in pastel, gouache and watercolour - generally entitled Autour d’un point (or Around a Point), which Kupka produced at various times between 1911 and 1930, but with particular emphasis in the 1920’s. The artist’s study of the theme of universal gravitation is vividly expressed in these works on paper, with the spiralling motion of the forms further reflecting his interest in the dynamic forces and rhythms of movement in space. The only painting in the Autour d’un point series is a very large canvas, painted between 1925 and 1930 and reworked around 1934, in the Musée National d’Art Moderne in Paris.The present sheet is accompanied by a photo-certificate from Pierre Brullé, who dates the drawing to c.1920.

Around a Point (Autour d’un point)