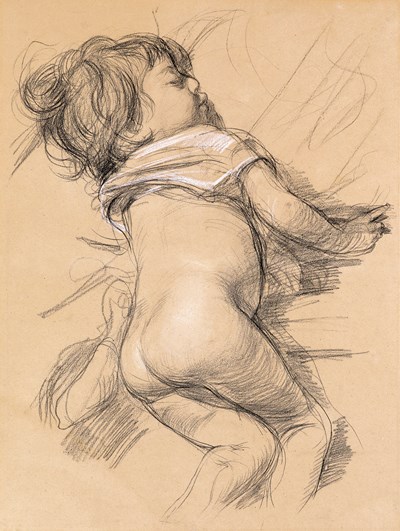 
Young children appear in a significant number of Gemito’s drawings, and the motif of a sleeping child was a particular favourite of the artist. The present sheet may be identified as a portrait of the artist’s only child, his daughter Giuseppina (also known by the nickname ‘Peppinella’), who was born in 1885. A related series of pen and ink and pencil sketches of the baby Giuseppina, including several of her similarly asleep or nursing at her mother’s breast, is in the Minozzi collection in Naples; the pose of the child in the present sheet is, in fact, almost identical to that of the sleeping Giuseppina in one of these drawings. The present sheet may therefore be dated to 1885 or 1886. As the inscription on the verso of the sheet confirms, this drawing later belonged to Giuseppina Gemito herself.Gemito also made several drawings and sketches of his four grandchildren, Bice, Alessandro, Annita and Carlotta.

Provenance:
The artist’s daughter, Giuseppina Gemito (according to the inscription on the verso)Mario and Pico Cellini, RomePrivate collection, Florence, since the 1970’s.