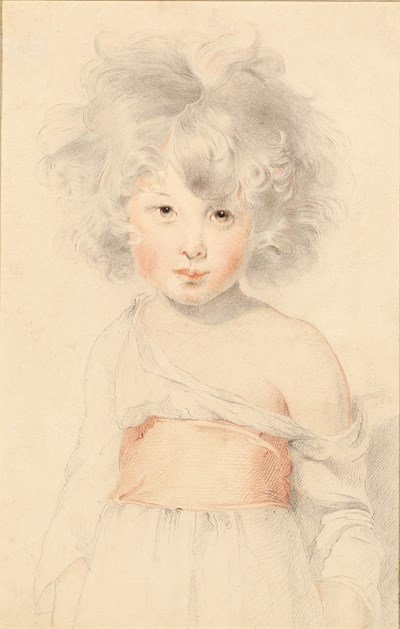 
Thomas Lawrence was particularly admired for his portraits of young children, whom he depicted with great sensitivity and charm. Kenneth Garlick has observed that ‘Lawrence was noted for his success not only in drawing children but also in identifying with them. They loved him, and his quick, sympathetic eye could catch their movements to perfection.’ This striking drawing is a portrait of the young Charles Malton, born in 1788 and the son of the scene painter and architectural draughtsman Thomas Malton the Younger (1748-1804). In later years, Charles Malton would study architecture with Sir John Soane. Although he won a silver medal for architecture at the Royal Academy in 1807, there is no evidence that the younger Malton ever worked as an architect. Many of Lawrence’s portrait drawings, and especially those of children, were reproduced as prints, often at the artist’s instigation. For much of the last two decades of his career, Lawrence commissioned the engraver Frederick Christian Lewis (1779-1856) to reproduce many of his finest portrait drawings in the form of stipple engravings, both to serve as a record of them and also as a means of disseminating his most significant and appealing works to the public at large. Lewis was to be occupied almost exclusively on prints after Lawrence’s work until the artist’s death in 1830. The present sheet was one of those later reproduced by Lewis, with the stipple engraving published by Colnaghi in 18315. The print bears the inscription ‘A Portrait / by Sir Thomas Lawrence PRA at the Age of 20 / from the original drawing in the possession of Charles Malton Esqre.’ This drawing was once in the collection of the English art dealer and collector Edwin Marriott Hodgkins (1860-1932), who worked from premises in London, Paris and New York, and was exhibited by him in his New York gallery in 1911. In the same year Hodgkins presented a small group of seven English drawings from his collection to the Louvre, including works by Richard Cosway, John Downman and Lord Leighton, as well as one drawing by Lawrence; a portrait of Charlotte Augusta, Princess of Wales.