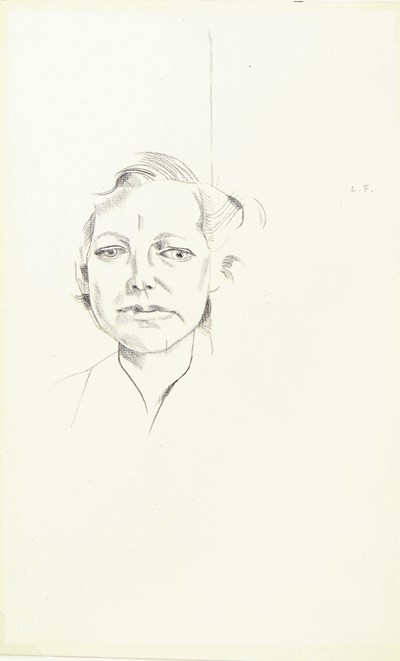 
Lucian Freud’s approach to portraiture was always based on intense observation of his sitters. As he noted in a 2009 interview, ‘I only did heads of people in the early days so I probably felt I should get the most out of them. I sometimes looked so hard at a subject that they would undergo an involuntary magnification.’ Later in the same conversation, he added, ‘I never put anything into a picture that I don’t actually see when I’m painting a subject. However, I’m not trying to make a copy of the person. I’m trying to relay something of who they are as a physical and emotional presence...I don’t try to represent what I think about them. I would rather learn something new. Doing a portrait is about seeing what you didn’t see before. It can be extraordinary how much you can learn about someone, and perhaps about yourself, by looking very carefully at them, without judgement.’Drawn in c.1952, this is a portrait of the Australian-born Morna Campbell MacKormick (1906-1982), the wife of Sir Colin Anderson (1904-1980), Director of the P & O Shipping Line and a prominent art collector. The couple were married in 1932, and settled in London; first in Kensington and later in Hampstead. A friend of Kenneth Clark from their days at Oxford, Colin Anderson was member of the Contemporary Art Society from 1945 and its chairman from 1962. He was also Chairman of the trustees of the Tate Gallery between 1960 and 1967, and Chairman and Provost of the Royal College of Art. Colin Anderson was an early patron and supporter of Francis Bacon and Lucian Freud, both of whom would occasionally borrow significant amounts of money from him in the late 1940’s and early 1950’s. (Writing in 1952 - the approximate date of this drawing - Anderson replied to one letter from Freud asking for money: ‘My dear Lucian, How rash of you - how unwise - to ask me 'to think of you as a firm or company'. As such you would be turned down flat, as being unable to provide any security for such a loan. Luckily for you I know so much more of those extraordinary creatures, firms and companies, than you ever will, that I cannot even begin to think of you in terms of them.’) In gratitude for his financial support, Freud gave Colin Anderson a collaborative album or notebook of texts by Stephen Spender accompanied by Freud’s drawings, produced in Wales several years earlier in 1939, which Anderson eventually returned to the artist in 1968. As collectors, Sir Colin and Lady Anderson assembled a fine collection of Art Nouveau works of art, which was bequeathed to the Sainsbury Centre for Visual Arts at the University of East Anglia in Norwich. Among contemporary artists, the Andersons owned, as well as works by Freud, drawings and watercolours by Edward Ardizzone, Robert Colquhoun, John Craxton, David Jones, Henry Moore, Ceri Richards and Graham Sutherland.In drawings such as this can be seen the lifelong influence on Lucian Freud of the portrait drawings of the great 19th century French painter Jean-Auguste-Dominique Ingres (1780-1867). This is especially true of Freud’s portraits of the late 1940’s and 1950’s, leading to Herbert Read’s celebrated and perceptive description of Freud as ‘the Ingres of existentialism.’ Freud’s appreciation of Ingres’s skill as a draughtsman remained undimmed throughout his career. Indeed, as he once said of Ingres, ‘His drawing is evocative in a way that forces us to believe in it. A line, any single line, of his drawings is worth looking at.’