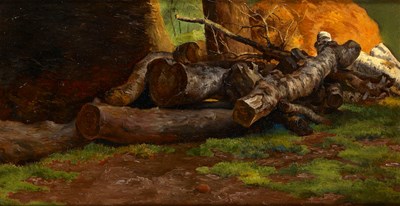 
The present sheet is part of a group of drawings and oil sketches by Jean-Michel Cels that appeared on the art market in London in 1997. The artist’s inscription on the verso notes that this sketch was painted in 1840 on the outskirts of Brussels. In painting works such as this, Cels may well have been aware of the pioneering plein-air painter Pierre-Henri de Valenciennes’s statement that artists should make oil sketches of trees, to study the bark and the form of the tree closely.Two oil sketches by Jean-Michel Cels, executed in oils on paper and sharing the same provenance as the present sheet, are in the collection of the National Gallery in London; one depicts a study of clouds and the other a study of trees in a ravine. Another oil sketch study of clouds and sky by Cels is in the Thaw Collection at the Pierpont Morgan Library in New York, while a further example was in the collection of the late Charles Ryskamp, New York.