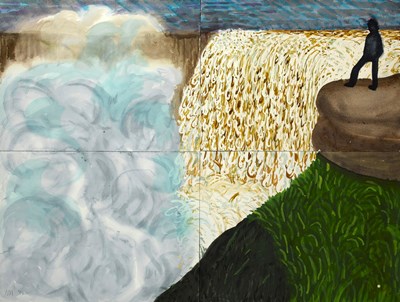 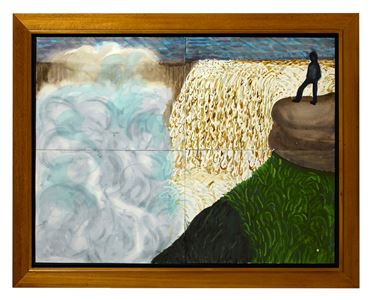 Dettifoss from the Other Side Sold


David Hockney came to watercolour relatively late in his career. As he has recently said, ‘It’s not an easy medium but I like the discipline it gives you. Once you put down the marks, that’s it. You know you can’t fudge it. There are certain ways you have to work. You can’t put a light colour on a dark colour…one watercolour technique you use is with transparent colours and the white of the paper. How many layers you put on depends on how much glow there’ll be. If there are too many layers, the image will become dull.’In March 2002 Hockney made several visits to the exhibition American Sublime at Tate Britain in London. The exhibition, devoted to the 19th century tradition of epic landscape painting in America, made a particular impression on the artist. As he recalled later that year, ‘The subject matter of American Sublime – the large landscape – made me, in April 2002, think of going North. I know sunsets don’t last long in the South West. To have longer periods of twilight (when colour is not bleached but extremely rich) one has to go North. I made a trip to Norway in May, was very taken with the dramatic landscape and returned to go much further north, when in June the sun never sets at all. You can see the landscape at all hours, 24 hours a day. There is no night. I found myself deeply attracted to it, and then went to Iceland twice to tour the island.’ These trips to Scandinavia and Iceland, close to the Arctic Circle, resulted in a series of large-scale, panoramic watercolours, drawn on several sheets of paper of equal size. These large watercolour drawings, made up of several joined sheets of paper, were in turn based on a series of double-page drawings in small sketchbooks, which remain in the artist’s collection. Hockney has noted of these monumental works that ‘overcoming the technical difficulties of the watercolour medium for large scale works was a solvable problem. The main difficulty is that washes have to be put on horizontally, but drawing really has to be done vertically to enable one to see it. As all this developed it opened out the medium, leading eventually to the large double portraits…’The present sheet depicts the waterfall of Dettifoss in Iceland, one of the largest and most powerful waterfalls in Europe. There the river Jökulsá á Fjöllum, one hundred metres wide, plunges over a basaltic cliff some forty-five metres in height into a deep gorge in the Jökulsárgljúfur canyon. Access to the waterfall is difficult, and the site can only be reached by a rough road.

Dettifoss from the Other Side