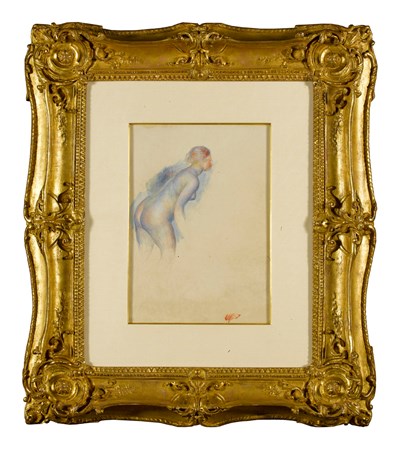 Study of a Bather Sold


The motif of young women bathing by a river or lake was one to which Renoir returned throughout his late career, and most significantly in the large painting known as the Great Bathers (Les grands baigneuses), painted between 1884 and 1887 and today in the collection of the Philadelphia Museum of Art. This major canvas, on which he worked for four years, was to be of seminal importance in the artist’s career, establishing the female nude as a central and recurring theme in Renoir’s work from then on. It was also important in establishing the artist’s renewed interest in figure drawing. This lively watercolour is a preparatory study for the figure at the left of Renoir’s painting Bathers in the Forest of c.1897 in the Barnes Foundation in Merion, Pennsylvania, a painting executed some ten years after the Great Bathers. In the Barnes canvas, more loosely painted than its larger predecessor, Renoir adapted the formal grandeur of the Great Bathers into a more casual idiom. As John House has noted of the Barnes painting, ‘in contrast to the stiffness and stillness of the figures in the earlier canvas, the figures are far more animated and the softly brushed paint-handling gives the whole canvas a sense of movement and energy.’ Like the Great Bathers, the composition of the Bathers in the Forest appears to have been similarly inspired by the Baroque sculptor François Girardon’s lead bas-relief frieze of bathing nymphs on the wall of a fountain and pond at one end of the Allée d’Eau at Versailles.The present sheet is the most highly finished of the handful of preparatory studies for the Barnes Foundation Bathers in the Forest that are known. A pencil study for the same figure, with the second, reclining figure also lightly sketched in, is in the National Gallery of Australia in Canberra. A very large study of the entire composition of the Barnes painting, with the figures drawn in outline in pencil, is in the collection of Dorothy Braude Edinburg, while much of the same composition is found in an oil sketch of several of the figures, in a private collection in Paris.The faintly sketched reclining figure at the right of the sheet also appears in the Barnes canvas, and echoes a similar figure in the Great Bathers. Indeed, in painting the Bathers in the Forest Renoir appears to have incorporated several motifs he had previously developed for the Great Bathers, some of which were not used in the earlier work but which appear in studies for it. As Christopher Riopelle has noted, ‘as he worked on the Great Bathers Renoir considered several individual figures and figure groups he later laid aside, only to take them up again in the 1890s. Though painted a decade later, the Barnes canvas reflects some of the options for figures and figure groups with which Renoir juggled as he contemplated the Great Bathers.’ The number of preparatory drawings that may be related to the Barnes painting of Bathers in the Forest is a testament not only to the importance of the painting to Renoir, but also to the significance the artist attached to the practice of drawing in the 1890’s. John House has noted of Renoir’s drawings of this period that ‘linear concerns were not an alternative to colour. He also made jewel-like watercolour studies in preparation for paintings such as Bathers, and in the final pictures luminous colour lies between even the sharpest contours. The forms in them are crisply defined at their margins, but their internal modelling is suggested by nuances of colour, not by chiaroscuro; Renoir thus starkly juxtaposed on the canvas the two basic conventions for representing form in paint, traditionally seen as opposites: by form and tone, and by colour.’ Figure drawings in watercolour by Renoir remain rare today, however. A stylistically similar study of a female nude, also drawn in pencil and watercolour, is in the collection of the Albertina in Vienna. As one recent scholar has noted of Renoir’s late works, ‘In drawing as in painting, it is the female form that dominates, both in the group studies and in those of isolated figures. Everything contrives to show off the female body in all its glowing splendour.’ Renoir’s drawings of nude bathers were also greatly admired by his fellow artists. After a visit to his studio in January 1886, the painter Berthe Morisot wrote in her private notebook: ‘He is a draughtsman of the first order; it would be interesting to show all these preparatory studies for a painting, to the public, which generally imagines that the Impressionists work in a very casual way. I do not think it is possible to go further in the rendering of form; two drawings of women going into the water I find as charming as the drawings of Ingres. He said that nudes seemed to him to be one of the essential forms of art.’

Study of a Bather