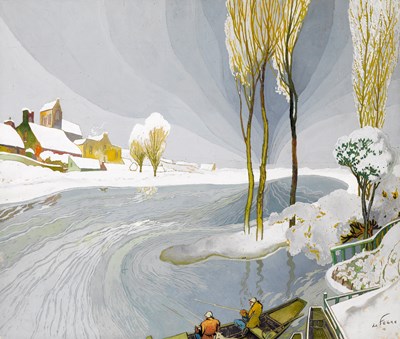 
This evocative winter landscape is likely to date from the early 1920’s, when Georges de Feure produced a number of paintings and gouaches of small towns and villages, often inspired by the landscape of the artist’s native Holland. (In June 1922 one of these, A Village in Holland, was acquired from the artist by the French state for the sum of 2,000 francs.) A stylistically comparable Dutch winter scene is in a private collection in Munich, while another similar snow scene in gouache, though probably somewhat earlier in date, is in another private collection.Ian Millman has suggested that such works as this may, as a group, have been intended by the artist to represent a sort of panorama of landscapes in different seasons. As he further notes, ‘De Feure developed a highly personal, original approach to the [landscape] genre that may best be described as Art Nouveau landscape painting. It distanced itself from Impressionism and Neo-Impressionism on one hand and the reactions against these movements by Gauguin and the Pont-Aven Group and the Nabis on the other, yet the common factor underlying all these disparate currents was the impact of Japanese art.’