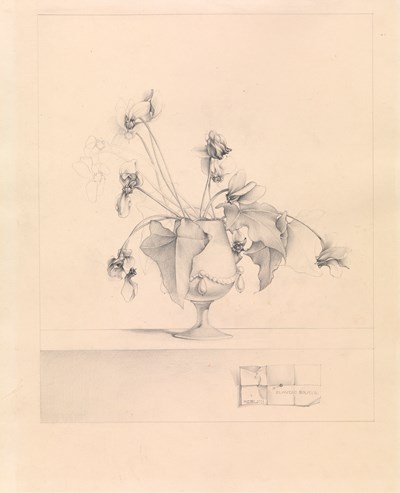 A Vase of Flowers Sold


Drawn in 1962, when the young Claudio Bravo was living and working in Madrid, the present sheet was formerly in the collection of the artist, socialite, writer, diplomat and fashion editor Fleur Cowles (1908-2009), who acquired the drawing from Bravo and later sat for him. As Cowles recalled in later years, ‘The three portraits of me I am proud of were painted by Rene Bouche, Rene Gruau and Claudio Bravo, the aristocratic Chilean painter. Bravo come into my life twenty years ago when I discovered him after seeing a Botticelli-like portrait of friends in Madrid: today he is an immensely sought-after painter. My portrait is a masterpiece of draughtsmanship, which he took a year to finish (though he had only taken an hour to sketch my head and hands before going back to Madrid to work).’

Provenance:
Acquired from the artist by Fleur Cowles, New York, London and SussexThence by descent until 2014.

A Vase of Flowers