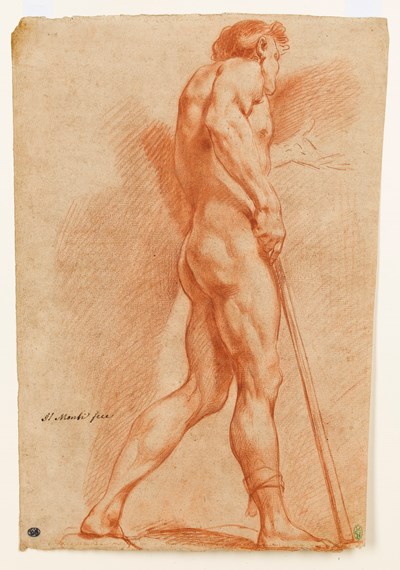 
A stylistically related red chalk drawing of a male nude academy, also from the collection of Alessandro Maggiori and similarly attributed by him to Francesco Monti, was on the art market in 1997 and 1998. The collector Count Alessandro Maggiori (1764-1834) assembled a large and varied collection of Italian drawings, which are invariably annotated by him with the place and year of their purchase. From these inscriptions it appears that Maggiori was mainly active between 1785 and 1829, acquiring drawings in Bologna, Faenza, Rome and Naples. Numerous drawings from Maggiori’s collection were later acquired by Pier Giulio Breschi, whose collection was in turn acquired en bloc by the publisher Claudio Argentieri; as a result the collector’s marks of the latter two are almost always seen together on a drawing. The Breschi-Argentieri drawings seem to have been dispersed in the 1950’s.

Study of a Standing Male Nude