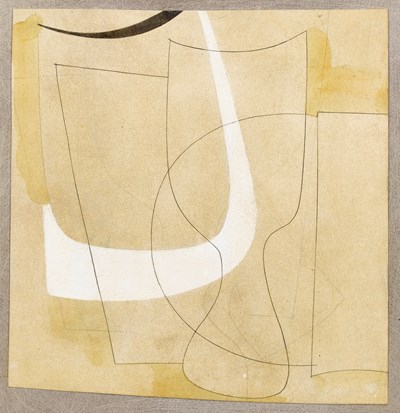 
The present sheet, dated March 1959, was completed the year after Nicholson had settled in the canton of Ticino in southern Switzerland, where for the first months of his stay, he lived and worked in a small, two-room house. ‘With a real sense of starting afresh, he adapted to the lack of space and set about making the first of a spate of drawings – some two hundred over the next two years - all of them variations on familiar still-life objects…Throughout the 1940s and 1950s still life was a major theme in his paintings. Now he would explore its latent possibilities purely in terms of line…The line of a cup or a beaker extends in an abstract rhythm and plays against the free-flowing lines of a jug or goblet in one, seemingly continuous, movement…The shape of the spaces between objects is as important as the shape of the objects themselves, so that there is a teasing interchange between the two. Always Nicholson’s drawings bear the marks of their physical making, nothing is fudged or concealed, each line is to be appreciated for its qualities as a line as well as for its function of delineating.’ After moving into a larger house and studio in 1960, Nicholson began to concentrate on his painted reliefs, which occupied him for much of the following decade. As one scholar has written, ‘The drawings and reliefs executed by Ben Nicholson between 1950 and 1975…stand as his most assured, most characteristic achievement, and, with the white reliefs of 1934-9, are the works by which he himself wished to be judged…The drawings have mistakenly been treated as somehow subsidiary to the paintings and reliefs when in fact they have qualities of wit, poetry and spontaneity quite special to themselves – qualities which, added to their variety and sheer virtuosity, entitle them to fully equal status…they are perhaps Nicholson’s most personal expressions.’

Provenance:
Durlacher Brothers, New YorkAcquired from them in November 1959 by I.A.L. and Barbara Diamond, Los AngelesThence by descent until 2008.