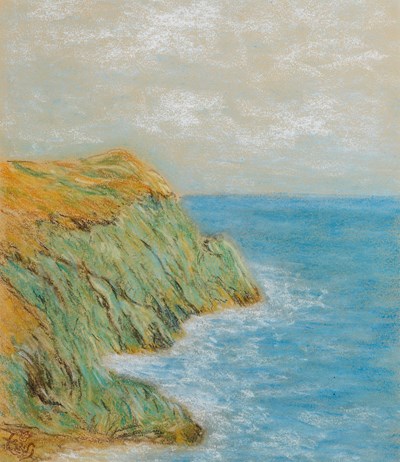 
The present sheet is a fine example of Schuffenecker’s use of pastel, a medium he favoured and which he used with considerable skill throughout his mature career. Jill Grossvogel has noted that ‘The suitability of this medium to Schuffenecker’s particular vision cannot be overstated: pastel enabled Schuffenecker to establish the nuanced tonality, the forms softened by layers of light and shadow, recognizable as the implicit statement advocated by the symbolists…The pastels of Degas were no small contribution to the development of Schuffenecker’s technique…Like the master he so respected, Schuffenecker felt that the medium of pastel allowed him to retain luminous color without sacrificing the linear control which, again like Degas, he believed to be crucial.’ This drawing may be dated to the 1880’s or early 1890’s, when Schuffenecker produced a number of paintings and pastels of coastal views in Brittany and Normandy, particularly near Yport and Étretat. The pastel drawings of this period are, in particular, among the artist’s finest works in this demanding medium. As one scholar has noted, ‘The lightness of pastel, its own evanescence, was especially appropriate to Schuffenecker’s landscapes and seascapes – its transparent qualities and the ease with which it could be manipulated were ideally suited to capturing movement, setting down images whose essence was literally fleeting, changing, inconstant in appearance at any given moment.’ As another scholar has commented of Schuffenecker, ‘In his pastels from Normandy, the world appears as ephemerally fleeting reflections of an intensity that is matched only by the later works of Claude Monet. But Schuffenecker’s light is significantly cooler than Monet’s. Everything is enveloped in an atmospherically scintillating haze created by mixing white into the pigments.’A number of pastel drawings by Schuffenecker of the coastal cliffs at Étretat and elsewhere, similar to the present sheet in size and conception, are in the collection of Tate Modern in London, while others are in French private collections.