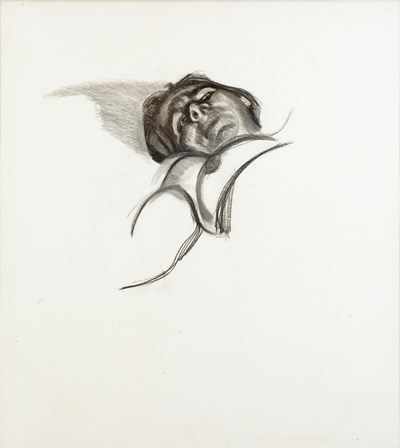 
Drawn in 1989, this large drawing may be related to a series of paintings and etchings by Freud of reclining male and female nudes of the later 1980’s and early 1990’s. As one modern scholar has noted of these nudes, ‘Freud’s Naked Portraits are his most disturbing and subversive works. His figures are shown reclining on a bed or sofa, often either asleep or in a state of introspection or reverie, in strange, unflattering poses that are nevertheless often natural to the way they sleep or relax by themselves. Commonly viewed from an unusual vantage point, the angular limbs, foreshortened faces, and tortured body language…rebuke the tradition of the ideal nude.’A similar foreshortened head is seen in such paintings as Night Portrait of 1985-1986.