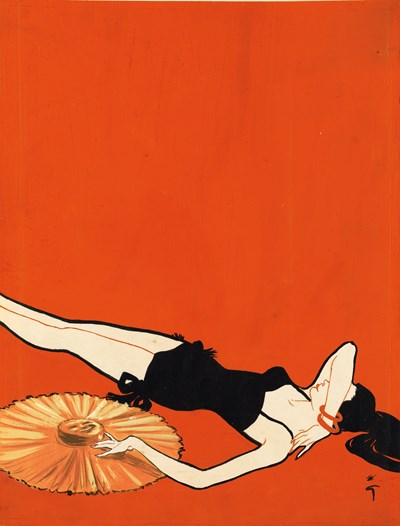 
The prominent use of red in this drawing is a characteristic feature of many of René Gruau’s illustrations. The artist once claimed that ‘Red and black are my two favorite colors. Red is a very powerful color for posters. But I have a special taste for red in general, in decoration and so on.’ This drawing was formerly in the collection of the artist, writer and fashion editor Fleur Cowles (1908-2009), who founded the magazine Flair in 1950. Lavishly designed and produced, the magazine was short-lived, however, and only twelve issues were published between February 1950 and January 1951. The magazine was known for its bold design, lavish production, keyhole covers and expensive stock. Cowles engaged Gruau on an exclusive contract to produce illustrations for Flair, and was largely responsible for establishing the artist’s reputation in America. As Cowles later recalled of Flair’s approach to the world of fashion, ‘The French and American couture had fascinating treatment, especially by France’s René Gruau, who I brought to America, a painter considered by many to be a modern Toulouse-Lautrec. His women are real, superbly but recognizably so (as women hope to see themselves).’ The inaugural issue of Flair, published in February 1950, included a small booklet introducing Gruau’s work as a fashion illustrator to its American audience. In this sixteen-page insert, it was noted that, ‘The great fashion artist, like Gruau, becomes a force that extends far beyond his own field of illustration...FLAIR believes that Gruau has come of age in a time ideally suited to his talents...His innate sense of elegance is Parisian, but the Gruau woman is drawn by a man who has lived in many countries, who has watched her stand out with unstudied effectiveness against any background. Obviously, the artist likes and admires her. She is vibrantly contemporary, with a mind of her own, a hundred varied interests, and a magnificent adaptability to whatever world she moves in. She finds it a complete joy to be a woman. She never pretends to be above fashion, indeed revels in it as her birthright, but her inner security prevails: fashion is never imposed on her, she never submits to the stupidly commonplace or extravagant. FLAIR enormously admires this Gruau woman, confident that she will assume an importance far beyond her place in fashion. An ideal of beauty in our time, she will become part of an invaluable record for the future critic and historian.’

Literature:
Alfred Hayes, My Face for the World to See, London, 2018, reproduced on the cover.