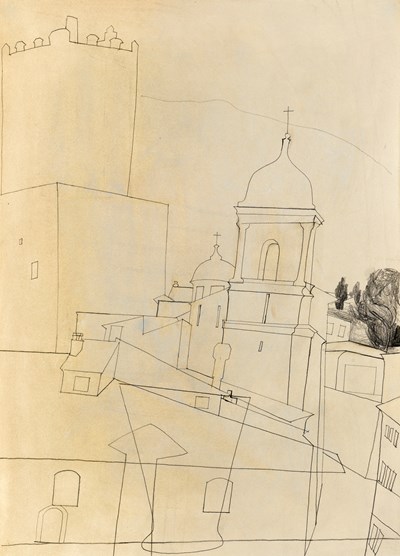 
In 1950 Ben Nicholson made his first visit to Italy since the end of the Second World War, and over the next few years began to take a new interest in landscape. He produced a number of drawings of favourite views, sites and buildings throughout the provinces of Tuscany, Lazio and Umbria. As Peter Khoroche has noted of these drawings, ‘He might spend the morning wandering around a town, then be struck by some architectural feature or grouping and feel moved to draw it. Laying no claim to a technical or historical knowledge of architecture, what interested him was the shape, the proportion, the lie of a building – its inner essence or personality would speak off an idea for a free variation upon it. Buildings, like still life objects, were a starting point only: naturally there was no point in mere imitation. On the contrary, Nicholson realized that he had to dare to be free when creating one work of art out of another. Architecture in landscape offered an opportunity to combine his love of precise structure with his feeling for poetry and acute sensitivity to the spirit of place.’As the artist’s inscription on the verso notes, this large drawing was made in Rome on the 1st of July, 1954, when Nicholson was staying with his niece Jenny Nicholson at Torre del Grillo, between the Forum of Trajan and the Quirinale. He also paid a visit to the gardens at Ninfa, southeast of Rome. The present sheet is apparently one of only three or four drawings made during this trip to Rome, as the artist found the Roman climate too hot. He returned to Torre del Grillo in the autumn of the following year. Many of Nicholson’s Italian drawings show his fondness for local architecture and landscape. As the artist’s third wife Felicitas Vogler has written, ‘‘When I draw an Italian cathedral’, says Ben Nicholson, ‘I don’t draw its architecture, but the feeling it gives me.’...I have often observed on our travels how B.N. will sit rapt for an hour or two before his subject, usually motionless, but sometimes walking around it to view it from all angles...His landscapes and architectural drawings...are to my mind distinguished from a very early stage by clarity and the great art of omission. They have a delicacy combined with mastery in their strokes, which seem to become more and more economical with the passage of time. For all their fineness they are often of an almost palpable plasticity.’ In many of his Italian drawings, Nicholson would first apply a thin wash of oil paint to the surface of the sheet, often well before he began the drawing itself.Shortly after it was made, this drawing was lent by Nicholson to the important retrospective exhibition of his work organized by the British Council in 1954 and sent to Amsterdam, Paris, Brussels and Zurich before culminating at the Tate Gallery in London in the summer of 1955.A closely related drawing of Rome - dated July 30, 1954 and showing the same view - was part of the extensive collection of drawings by Nicholson belonging to the artist’s close friends, the pioneering collector Helen Sutherland and, later, the scholar Nicolete Gray.

Provenance:
Gimpel Fils, LondonAcquired from them in September 1965 by a private collectorBy descent to Janice Newman Rosenthal, until 2011.