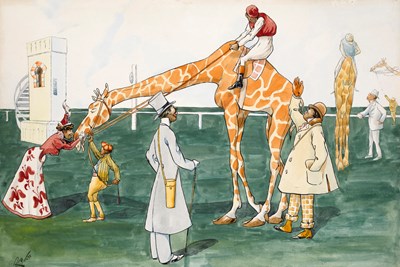 
A comparable series of thirteen coloured lithographs of comical hunting scenes by Rudolf Pick, including one composition of a group of giraffes, served to illustrate a large-format portfolio entitled Lebel’s Sport-Collection. Jagden in Afrika und Asien: Skizzen zum Tagebuch des Lord John W. Humbug, published by Verlag S. Lebel in Vienna. Pick also produced a similar series of watercolours to illustrate The Stony Sinai, a humorous account of a British hunting expedition in the desert. Pick is known to have produced at least one other finished watercolour drawing of a giraffe, which was included in the 1916 studio sale.