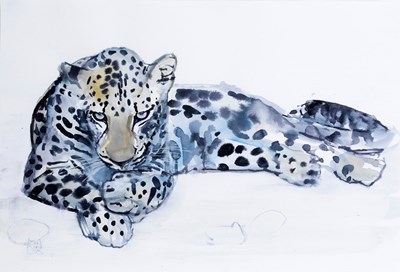 
Drawn in 2008, this large watercolour is part of a recent series of drawings and paintings by Adlington of the animals of the Arabian peninsula. The artist has spent part of the last few years in the Middle East, studying animals in Oman, which has some of the last wild habitats of several endangered species native to the region, and at the Breeding Centre for Endangered Arabian Wildlife in Sharjah, United Arab Emirates. The Arabian leopard, once found throughout the peninsula, now survives in the wild only in small numbers, and remains in danger of extinction.