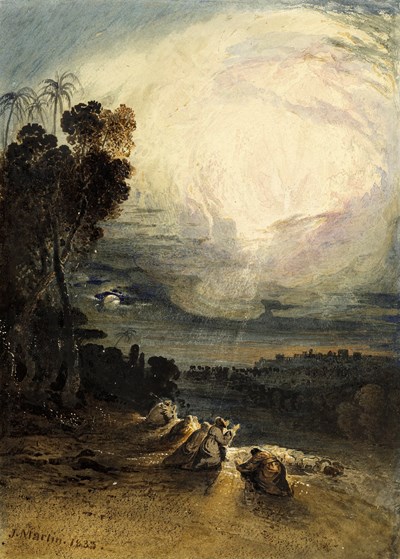 The Annunciation to the Shepherds Sold


John Martin was, as the scholar Martin Myrone has described him, ‘the pre-eminent creator of religious imagery during his lifetime, whose biblical illustrations endured long after his death’. Drawn in 1833, at the height of the artist’s success and prosperity, this lovely, refined watercolour is one of the earliest versions of a composition of The Annunciation to the Shepherds that Martin was to revisit, mainly in the form of prints, over the next decade. This watercolour, however, appears to be the only surviving depiction of this Biblical composition in an upright format, as all the other, later versions of the subject by the artist are horizontal in orientation. Signed and dated, this finished watercolour was almost certainly intended as an autonomous work of art, intended for exhibition or sale. The same is true of a larger and more elaborate watercolour of the same subject and date, but different in composition, which was on the art market in 1982.The present sheet is an outstanding example of Martin’s skill as a watercolourist, a field in which he arguably remains underappreciated today. Offering a particular contrast to his large-scale, visionary oil paintings, intimate works such as this reflect a more lyrical side of the artist’s unique vision.

The Annunciation to the Shepherds