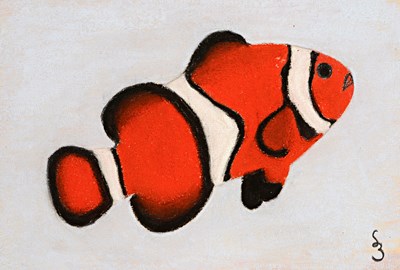 
Simon Bussy’s pastels were widely admired by his contemporaries, and avidly collected by many. The poet Guillaume Apollinaire wrote of the artist that, ‘The pastels of Simon Bussy are delicate images, as precious as Persian miniatures. Precision and vitality are the characteristics of Simon Bussy’s talent, and his use of colour often reaches the heights of Matisse.’ For his drawings, Bussy invariably used a combination of French-made Roché pastels and buff paper produced by the firm of Cartridge in London. His animals are usually depicted against a toned background of one muted colour, with a reserve of white paper left untouched around the edges of the compositionThis study of a clownfish is a fine and typical example of Bussy’s refined, delicate pastel technique. As the contemporary scholar François Fosca noted, in one of the first monographs on the artist, ‘Simon Bussy developed a new style: with minute precision he applied a vaporous and blurred technique to drawing. In his work, there was never any hatching or vertical marks which would reduce the effect of the layer underneath, or make it stand out. Bussy developed a soft, velvety medium which always avoided becoming cloying or limp.’Most of Simon Bussy’s pastel drawings of fish seem to have been made at the zoo at Vincennes, since he was unable to find adequate lighting at the London Zoo in order to make studies of fish there. This charming pastel study may be related to a small painting of two clownfish, dated 1941, which appeared on the art market in London in 1991.