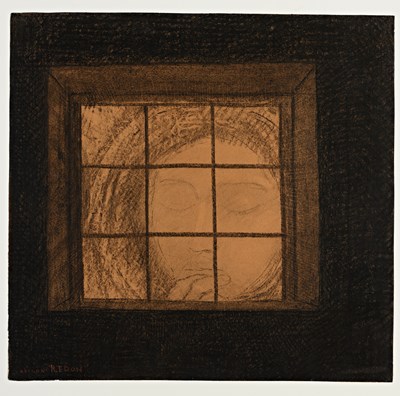 A Face at a Window Sold


In a well-known letter, written in 1894 and published in L’Art Moderne the same year, Odilon Redon recalled his discovery of charcoal as a drawing medium: ‘Around 1875 my inspiration came only in crayon, in charcoal, that volatile, impalpable powder that flees under the hand. And the medium, because it offered me a better means of expression, remained with me. This lacklustre material, which has no inherent beauty, was a great help in my explorations of chiaroscuro and the invisible...It should be said, however, that charcoal leaves no room for lightness; it is full of gravity and one can only use it successfully in the same spirit. Nothing that does not stimulate the mind can produce worthwhile results in charcoal. It is on the verge of something unpleasant, something ugly.’This drawing belongs with a small group of ‘noir’ charcoal drawings of figures seen imprisoned behind bars, datable to the early 1880’s. These include a drawing entitled The Convict of 1881 in the Museum of Modern Art in New York and a Face Behind Bars, formerly in the collection of Henri Petiet and today in a private collection.Like many of Redon’s ‘noir’ charcoal drawings, the subject of the present sheet has remained profoundly enigmatic. A closely related drawing of an identical composition, of slightly larger dimensions, was in several Dutch collections in the first half of the 20th century and was most recently recorded with the art dealer Wolfgang Wittrock in Düsseldorf in 1994. Douglas Druick and Peter Zeger’s comments on that drawing are also relevant to the present sheet: ‘Religious life is likewise the theme of the contemporary drawing Redon exhibited at Le Gaulois under the title Behind the Grating...Haloed, the host-shaped head is depicted behind bars, fingers at its chin. In this respect, it recalls the figure in The Convict. But in place of the latter’s anguish, the face of the former appears serene, its closed eyes suggesting the ability to spiritually transcend its prison of the flesh by turning inward. This is possibly the unknown element to which the drawing’s alternate title, The Secret, alludes. It may also address the spatial ambiguities implied in this image of incarceration. For, on the one hand, the drawing implies that the host – the Church – is hostage, imprisoned and anguished like the convict...On the other, it is we, the viewers, who inhabit the dark prison of matter, who are cut off from a source of light and spirituality we can see but cannot reach.’Either the present sheet or its variant was included - under the title Derrière la grille (Behind the Grating) - in Redon’s second one-man exhibition, held at the offices of the daily newspaper Le Gaulois in Paris in March 1882.

A Face at a Window