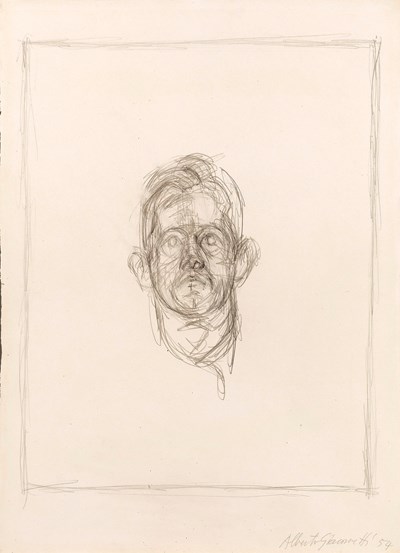 
The American writer James Lord (1922-2009) first met Giacometti at the Café des Deux Magots in Paris in February 1952, and was, as he recalled, ‘instantly mesmerised’ by the artist. He became friendly with Alberto and his brother Diego, as well as their circle of friends and associates, and was a frequent visitor to Giacometti’s studio on the rue Hippolyte-Maindron in the 14th arrondissement. Lord kept a journal that was to become the basis of a definitive biography of the artist, on which he worked for fifteen years; it was eventually published in 1985. He also published one of the first scholarly studies devoted to Giacometti as a draughtsman, in an essay for a catalogue accompanying an exhibition of the artist’s drawings at the Pierre Matisse Gallery in New York in 1964. Lord wrote the text for the first monograph in English dedicated to Giacometti’s drawings, which appeared in 1971.Around 1954, Giacometti drew about a number of pencil portraits of James Lord. Two of these are today in the collections of the Musée Picasso in Paris and the Fondation Pierre Gianadda in Martigny. Another portrait drawing of Lord was formerly in the collection of Ernst Beyeler in Basel and was recently sold at auction in London, while a further example is in a private collection in Munich. As Lord recalled of Giacometti’s drawings of him, ‘While he was working, Alberto peered at me constantly. The action of the artist’s pencil and the concentration of his gaze could be construed virtually as a unified creative process. It was obvious that his drawing depended absolutely upon my willing submission to its priority, and on the evidence of what he did Alberto clearly saw more in his ingenuous model than I could have perceived in myself.’ Giacometti also produced a painted portrait of Lord, executed over a period of eighteen days in 1964; the painting is today in a private collection.James Lord has written extensively about the present sheet in his book Plausible Portraits of James Lord, published in 2003: ‘The fourth and last portrait drawing I have chosen to reproduce is an illustration of Alberto’s absolute visual veracity via the form that most preoccupied him all his life: the human head. Here we see my solitary head, isolated in space, set autonomously alone in the center of the empty sheet, which can be construed as a semblance of the cosmos. It defies definition. After several years of semiabstract work in the early 1930s, Alberto had resumed purely representational work, especially the study of the head, and for this reason was drummed out of the silly surrealist sect by André Breton, who said, “Everybody knows what a head is,” when in fact a head is what is most puzzling and enigmatic about us all as soon as one peers beyond a commonplace configuration to contemplate its expressive mystery, its look that looks at the act of looking and its power to control the use of vision. For Alberto life was sight; seeing and being were equivalent. In this head study the model’s gaze again establishes his vitality. The essential structure of life is centered upon the eyes. This conviction was the metaphysical absolutism of Giacometti’s creative courage. It was not for nothing, he said, that the first benevolence offered to the dead is the closing of the eyes.’In September 1964, at the time that Giacometti was painting his portrait, Lord recalled a conversation he had with the artist: ‘He looked at me for a minute before beginning to paint, then said, “You have the head of a brute.” Surprised and amused, I replied, “Do you really think so?” “And how!” he exclaimed. ‘You look like a real thug. If I could paint you as I see you and a policeman saw the picture he’d arrest you immediately!” I laughed, but he said, “Don’t laugh. I’m not supposed to make my models laugh.”’Giacometti’s portrait drawings are among his most compelling works as a draughtsman, and the present sheet is a particularly fine and expressive example of his confident handling of the pencil. The use of framing lines and the fact that much of the paper is left untouched, as well as the absence of any other part of the sitter’s body, serves to focus the viewer’s attention solely on Lord’s head and face. Drawn with myriad, fluent strokes of a sharpened pencil, the sitter’s head – always the crux of any portrait by Giacometti – seems almost to project from the surface of the paper. The swirling graphite lines, surrounded by empty space, give a sense of the artist’s intense focus on the head of Lord, seated in the middle of the studio, to the exclusion of everything else. Lord himself has noted that, ‘As for the drawings themselves, their plastic and technical daring and individuality is obvious. They exist with an authority that rhetoric cannot presume to enhance. The skill and the audacity with which the blank page is made to play a part as important as the drawing itself is unerring. The vibrant and coursing vitality of the line, which never at the same time is allowed to exist merely for its own sake, remains always immediate. It is enough, after all, to say that a drawing by Giacometti could not possibly be by anyone else.’The present sheet is accompanied by a certificate from the Comité Giacometti, dated July 2010.