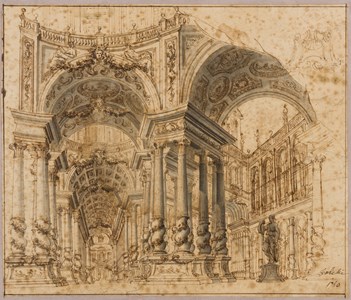 Three generations of theatre architects and stage designers, the Galli Bibiena family served the church and the princes of Europe for over a century. The family took their name from the Tuscan town of Bibbiena, where the founder of the dynasty, Galli, was appointed podestà, or mayor, in the early 17th century. The artistic dynasty began with Galli’s son, the painter Giovanni Maria Galli (1625-1665), who was born in Bibbiena and studied in Bologna under Francesco Albani. It was Giovanni Maria Galli’s sons Ferdinando (1657-1743) and Francesco (1659-1739), however, who were responsible for establishing the reputation of the family across Europe as architects and designers. Ferdinando Galli Bibiena began his artistic training in Bologna under three different masters with their own unique specializations—Carlo Cignani for painting, Giulio Troili for architecture and Giacomo Torelli for scene design. It was through the recommendation of Cignani that Ferdinando began working for the Farnese dukes in Parma. In 1708 he was called to Barcelona to aid with the decorations for the wedding festivities of Prince Charles III, the future Holy Roman Emperor. Thus began the long working relationship of the Bibiena family with the Hapsburg dynasty at the Austrian court. In 1712, Ferdinando took his two sons, Alessandro (1687-1769) and Giuseppe (1696-1757), with him to Vienna, where they joined his brother Francesco, who had spent eight years working as an architect and stage designer at the Austrian court of Leopold I, and later served as president of the Accademia Clementina in Bologna. Ferdinando ended his career in Bologna and Mantua, and also published a number of treatises, notably Varie opera di prospettiva (Various Works of Perspective), which appeared between 1703 and 1708. Arguably the most successful and distinguished member of the Bibiena dynasty was Ferdinando’s second son, Giuseppe Galli Bibiena. He accompanied his father to both Barcelona and Vienna, and after Ferdinando’s return to Bologna in 1717, stayed on in Vienna and became the chief architect and designer of court festivities and functions for the Emperor Charles VI. Giuseppe also worked as a scenographer in Linz, Graz and Prague, and ended his career at the Prussian court of Frederick the Great in Berlin. Alessandro Galli Bibiena worked mainly as an architect at the court the Elector of the Palatinate in Mannheim. Giuseppe and Alessandro’s younger brother Antonio (1700-1774) and nephew Giovanni Carlo Galli Bibiena (1717-1760) were also active as architects and designers; the former in Vienna, Mantua and Bologna and the latter in Bologna and Lisbon. The final member of the dynasty, Carlo Galli Bibiena (1728-1787), the son of Giuseppe, was active in Germany, Austria, France, Holland, Italy, England, Sweden and Russia.