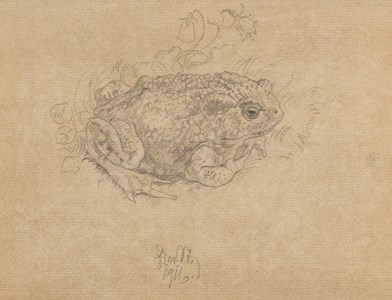 The landscape painter Edmund Carl Ferdinand Steppes studied at the private art school established by the genre and portrait painter Heinrich Knirr in Munich, and in 1893 exhibited his work at the Kunstverein in Munich. The following year he left the academy, and completed his artistic training on his own. By the turn of the century Steppes had begun to enjoy some success, selling his work to private collectors and state museums and enjoying the support of a number of influential figures in the art world. In 1904 he took part in the exhibition of the Deutschen Künstlerbund, and from 1905 onwards his landscapes took on a more individualized manner. He studied the art of the Old Masters, particularly of the late Gothic period, and after the First World War began to produce numerous drawings with detailed observations of nature, made mainly on sketching expeditions around southern Germany. These drawings – of flowers, plants and leaves, as well as trees and fantastic rock formations – account for some of his most distinctive works. Steppes exhibited throughout the 1930s and 1940s, and his work began to command ever higher prices. In January 1945 his studio was destroyed by an Allied bomb, which led to the loss of numerous drawings and some forty paintings. In 1963 a retrospective exhibition of Steppes’s work was held in Tuttlingen, on the occasion of the artist’s 90th birthday.