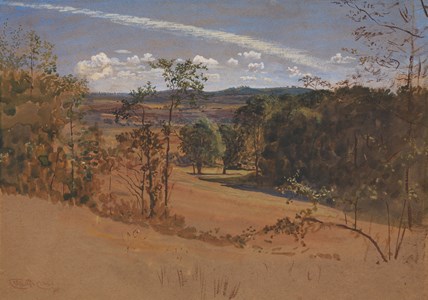 A painter, draughtsman and writer who may be regarded as one of the most significant figures of modern decorative art, Walter Crane was the son of a miniature-painter in Liverpool and settled in London in 1857. There he came into contact with the works of the Pre-Raphaelites and the writings of John Ruskin, and began working as an apprentice in the studio of the wood-engraver William James Linton. In 1862 he exhibited a painting of The Lady of Shalott at the Royal Academy, to critical acclaim. Later submissions to the Academy were rejected, however, and Crane chose instead to exhibit at the Grosvenor Gallery. Strongly influenced by Japanese colour prints, Crane worked as an illustrator of children’s books between 1869 and 1875, and it is as a book illustrator – particularly of fairy tales, of which several books were published each year – that he was best known, not only in England but also in Germany and elsewhere. A founder member of the Arts and Crafts Exhibition Society in 1888, Crane was elected master of the Art Worker’s Guild in 1888 and 1889. He worked with William Morris on books published by Morris’s Kelmscott Press and also produced designs for wallpaper. He taught at the Manchester School of Art, Reading College and the Royal College of Art.