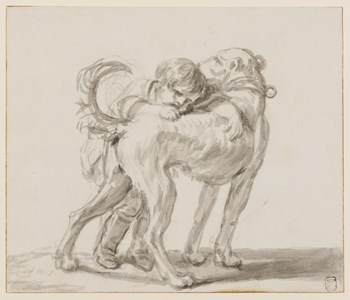 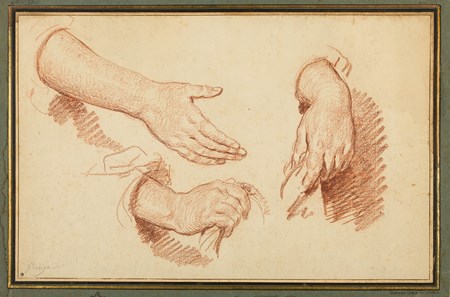 After a period of study in Lyon, Jean-Baptiste Greuze arrived in Paris around 1750 and entered the studio of Charles-Joseph Natoire. He was admitted into the Académie Royale as an associate member in 1755, in the category of peintre de genre particulier, but did not gain full membership as an Academician until 1769. His paintings of moralizing genre subjects, exhibited at the annual Salons, earned him the praise of the influential critic Denis Diderot. Among his most celebrated works in this field of ‘moral painting’, as it was defined by Diderot, was The Marriage Contract of 1761, now in the Louvre. He was also a superb portraitist, exhibiting a number of portraits at the Salon throughout the 1760s to considerable acclaim. Immensely famous and successful at the height of his career, Greuze enjoyed the patronage of such prominent collectors as Jean de Jullienne, Ange-Laurent de Lalive de Jully, the Duc de Choiseul, the Marquis de Marigny and the Empress Catherine II of Russia, although his difficult temperament often alienated other clients. Even the artist’s first great champion Diderot, writing to the sculptor Etienne-Maurice Falconet in 1767, described Greuze as ‘an excellent artist, but a very disagreeable character. One should have his drawings and his paintings, and leave the man at that.’1 In 1769, angered by the rejection of his reception piece - a history painting depicting Septimus Severus Reproaching His Son Caracalla - by the Académie Royale, who instead admitted him only as a genre painter, Greuze refused to exhibit at the Salon again for over thirty years, until 1800. Instead he exhibited and sold his paintings from his studio, with much success. However, his reputation suffered with the rise of Neoclassicism after the Revolution, although he received a royal pension from Louis XVI in 1792. Greuze died in relative obscurity at the age of eighty, in his studio at the Louvre. A gifted, versatile and prolific draughtsman, Greuze was praised as such by Diderot, who noted, in a review of the Salon of 1763, that ‘this man draws like an angel.’ He was equally adept in chalks, pastel and ink, and often exhibited finished drawings alongside his paintings at the Salons. The 18th century collector, dealer and connoisseur Pierre-Jean Mariette commented that Greuze’s drawings were much in demand, and that collectors habitually paid high prices for them.